Alexandra Morton: The Fight to Save Wild Salmon 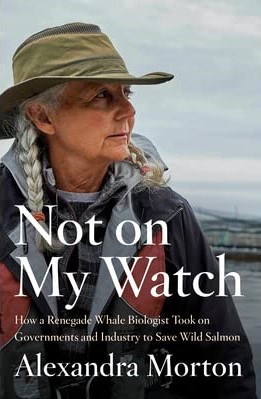 The rise of industrial fish farming on the Pacific Northwest has created an existential threat to wild salmon and the ecosystems that rely on them. For years, conservationists and biologists have sounded alarms on how pollution, the plague of sea-lice and bacteria, and unsustainable practices from this industry are affecting one of this region’s keystone species.

Come hear biologist and activist Alexandra Morton discuss her new book, NOT ON MY WATCH, where she tells the story of her 30-year fight against big business and government corruption to save British Columbia’s wild salmon.

HOW TO ATTEND:
Step 1: Purchase a copy of Not on My Watch from Massy Books to receive access to this virtual event. Purchase here: https://bit.ly/3rFXIXB
Step 2: Fill out the registration with your order number to receive the Zoom info! http://penguinrandomhouse.ca/morton

Alexandra Morton has been called “the Jane Goodall of Canada” because of her passionate thirty-year fight to save British Columbia’s wild salmon. Her account of that fight is both inspiring in its own right and a roadmap of resistance.

Alexandra Morton came north from California in the early 1980s, following her first love–the northern resident orca. In remote Echo Bay, in the Broughton Archipelago, she found the perfect place to settle into all she had ever dreamed of: a lifetime of observing and learning what these big-brained mammals are saying to each other. She was lucky enough to get there just in time to witness a place of true natural abundance, and learned how to thrive in the wilderness as a scientist and a single mother.

Then, in 1989, industrial aquaculture moved into the region, chasing the whales away. Her fisherman neighbours asked her if she would write letters on their behalf to government explaining the damage the farms were doing to the fisheries, and one thing led to another. Soon Alex had shifted her scientific focus to documenting the infectious diseases and parasites that pour from the ocean farm pens of Atlantic salmon into the migration routes of wild Pacific salmon, and then to proving their disastrous impact on wild salmon and the entire ecosystem of the coast.

Alex stood against the farms, first representing her community, then alone, and at last as part of an uprising that built around her as ancient Indigenous governance resisted a province and a country that wouldn’t obey their own court rulings. She has used her science, many acts of protest and the legal system in her unrelenting efforts to save wild salmon and ultimately the whales — a story that reveals her own doggedness and bravery but also shines a bright light on the ways other humans doggedly resist the truth. Here, she brilliantly calls those humans to account for the sake of us all.