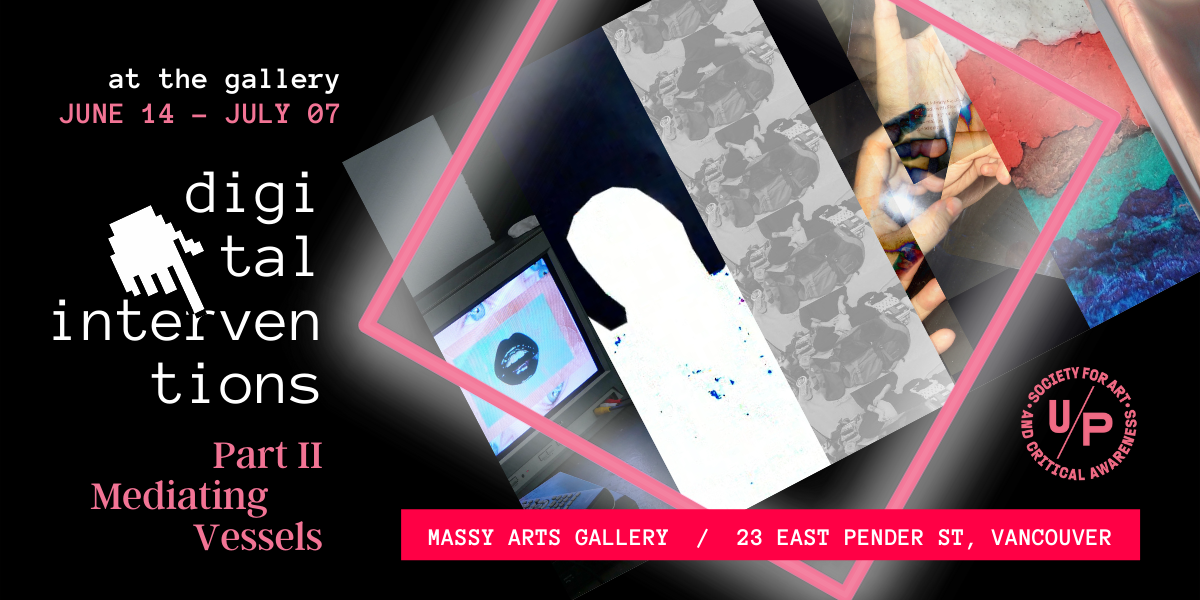 Working in conversation with contemporary digital mediations, the artists each contemplate the nature of our current reality, while questioning the expanding presence of technologies and the complexity within digital spaces.

Exhibited from June 14 to July 07, the second part of the exhibition, called Mediating Vessels, examines the relationship between digital outputs and the reception and distribution of information. The artists unravel the layers of digital archives, thus problematizing the institutions that claim to safeguard knowledge, while also acting as a basis of our understandings and internalizations of them.

Through this investigative lens, the works speak to ideas of permanence, sexuality and identity, and surveillance technologies — while subverting underlying expectations and forming new avenues of meaning.

The Massy Arts Gallery is located at 23 East Pender Street in Chinatown, Vancouver.
The gallery is open Tuesday to Saturday, 12pm to 5pm.
Entrance is free, and masks are mandatory.

This exhibition is generously supported by UNIT/PITT and CCA’s Arts Across Canada program as part of Wrong Wave Festival 2022.

Click here to know more about Part I – Heterotopias

The Artists + The Works

Kaila Bhullar is an interdisciplinary artist who specializes in editing, photography, mixed media, and audiovisual works. With a particular interest in abstraction and digitally-based art forms, Bhullar uses art-making as an introspective tool that explores various internal psychological and existential dispositions. As a queer and biracial individual, they are interested in analyzing cultural binaries and norms, using their practice as a vessel to bridge the gap between their identity and the mental choas surrounding being pulled in multiple directions simultaneously, as well as contextualizing feelings of disconnect and dissociation that arise as a result. These inquiries often manifest as collages and mixed media installations, which serve as an extension of the fragmented nature of their being.

Extensions examines the influence of modern technological meditations on the self, specifically looking into how they affect our connections to our bodies. The work contemplates prospective questions concerning existence being primarily gratified, permeated, and accounted for through technological interventions — smartphone usage, and social media/other digital archives. As the presence of technology feels overwhelmingly persistent at times, it ends up extending into our personal conceptions of identity, rendering the body disconnected from the self and mind, which informs the work’s disjointed form.

Debbie C (They/She)
Some of all things, 2022
Wallpaper print

Debbie C is an artist from Singapore whose practice is informed by her time working as a graphic designer. Their creative process concerns photographing items they own and the places they dwell in, in an effort to anchor themselves through those objects and spaces.

Their artworks dematerialize — that is, they minimize the importance of the object and replace it with the importance of an idea or a social relation. Debbie bases their ideas on Shinto, a religion rooted in Japanese culture. In particular, Tsukumogami, a collective term given to household objects that have existed for at least a hundred years and are believed to have become sentient, highlighting the way these objects often outlive their owners.

The transfer of personal objects between mediums runs parallel with the experience of holding and losing memories. When an object is converted into a photograph, there is a loss, or a process by which information slips and resurfaces as pixelation. This loss is dealt with through the activation of negative space in their works.

Some of all things navigates this loss through a compilation of video frame stills chronologically arranged into a grid. The work compresses time by presenting duration as a still image, but it represents not more than a minute of footage, so by giving space to individual frames, it can also expand time. Each frame shows a moment in the process of moving from one place to another, and having to decide which items to keep and which to leave behind.

Sena Cleave is a visual artist and writer who examines the tension between the felt experiences of our bodies and the ways that bodies are represented or reflected back to us. Cleave’s visual art process involves pilfering cultural matter from everyday life and repurposing it in their work to address issues of femininity, domesticity, and originality or authorship.

Their poems often feature parts of bodies, human or otherwise, researched under the guise of morphology. In biology, this is the study of body parts, and in linguistics, it is the study of the parts that make up a word, whereas Cleave’s morphology is a method of examining pieces to generate something that resembles a whole: one that is jumbled and misbehaving.

In Contact Image, Cleave reproduces a phrase from Pierre Loti’s essay A Ball in Edo, where he reflects on a party he attended in 1886 at the Rokumeikan dance hall. As part of a larger effort to present Japan as a new, modern nation, the event catered to the tastes of foreign dignitaries, but Loti characterizes the women hosts’ manners and dress as failing imitations of European culture.

This work steals, copies, and recontextualizes Loti’s ideas through a scanner’s flatbed and Cleave’s racialized and gendered body.

kathy feng is an interdisciplinary artist born in Guangzhou, China. As an immigrant and child of immigrants, she grew up between cultures in a constant process of learning, unlearning, and relearning. This precarious framework informs the central themes of her work — concerned with the encapsulation and confrontation of memory, nostalgia, intimacy, and various forms of love. The mediums of image and text are linked, exploring the aesthetics of the temporal and the poetics of the personal.

moon river is a collage—of image and image, image with text, text through image. The image, consisting of multiple photographs digitally melted together, explores the question of vision and presence: it is neither here nor there, but somewhere in between.

The obscured LED-illuminated text, reminiscent of storefronts, billboards, and public-facing projections, peeks through the image — not quite a whisper, but not yet a shout. Like the moon’s reflection in water, it dips in and out of perception. moon river is a letter: about yearning, to be halfway, the loss of one thing makes way for another.

Vitória Monteiro, (b. 1997), is a visual artist who explores the intricacies of language abstraction, the reprocessing of information, and the anti-archive. Monteiro uses the mediums of papermaking, sculpture, installation, and performance to navigate the various realms that knowledge inhabits. With a subtle satirical undertone, they strive to locate themselves within these different spaces.

Their works embody themes of dislocation, translation, indexicality, and citation, rooted in reflections of growing up between cultures. Through their exploration of the various realms where information is produced and stored, be it academic, land-based, somatic, societal, personal, they strive to disrupt the colonial narrative stating that each of these spaces must live within their own, separate containers.

Wayback Machine (a three-dimensional index) is an archival object that functions as a storage system of language abstraction. The “machine” blends together traditional and digital practices of archiving into one silent, inarticulate, pulpy space of information.

Unlike its institutional counterparts, the work acts as an “anti-archive” by defying categorization and the standardization of the archival process. By defunctioning both paper as an archival tool and the meticulous categorization of a digital database, The Wayback Machine aims to act as a defective keeper of knowledge.

Hân Phạm is an emerging artist and experimental filmmaker from Saigon, Vietnam. Working with experimental video and film, photography, and soundscape compositions, Hân’s works think through the ephemerality of memory, language, and history in relation to the constantly changing and dislocated landscapes, rooted in the in-betweenness of distance as space for reflection.

Using on-site generated ads and altering them by process of re-photographing, physical and digital manipulation, folding, and scanning, the series aims to make visible these bodily relations with regard to the Bluetooth tracking network that we unknowingly engage with every day.

The series hopes to re-embody our spectral existence within surveillance reality, making this invisible technology known and seen through the experience of being photographed/photographing.

Paige Smith is an experimental filmmaker and visual artist whose work uses reflexive techniques to investigate viewers’ perceptions and interactions with art. Her work examines visual perception and the power of framing with a particular focus on human connections to body and place.

Working primarily in video, photography, mixed-media, and installation, Smith’s work reveals the lack of an objective point-of-view within lens-based art, and instead plays with the reciprocal power between viewer and artwork. Her artwork reaches out to its audiences to move them — to find understanding through a felt bodily experience.

By subverting this expectation, Smith avoids hypersexualization or pathologization of the bodies, and instead imagines a precious and dazzling vision of sexuality.

Our collective would like to acknowledge that this exhibition takes place on the stolen traditional territories of three Local First Nations: the xʷməθkwəy̓əm (Musqueam), Skwxwú7mesh (Squamish) and Səl̓ílwətaʔ/Selilwitulh (Tsleil-Waututh) tribes; as well as acknowledge the complex rooted history of displacement of people of colour in Chinatown’s neighborhoods.

We sincerely acknowledge our complicity as settlers in the ongoing displacement of Indigenous peoples, and acknowledge the absurdity that is the utter and deliberate neglect of treaty-making, in what is known today as “British Columbia,” as a perpetuation of colonization.

We would like to express our support of the governance, jurisdiction, and sovereignty of Indigenous peoples on their own land.