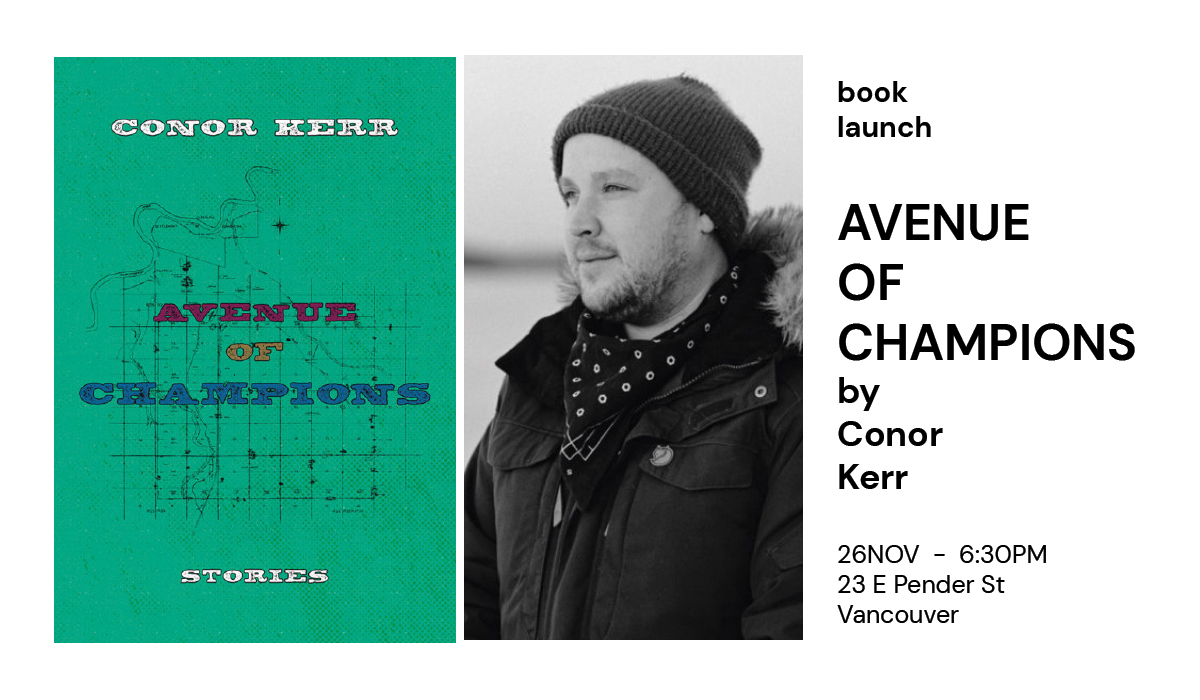 On Friday, Nov 26th at 6:30PM, join Massy Arts and Massy Books for the in-person launch of “Avenue of Champions”, a novel by Métis/Ukrainian educator, and writer Conor Kerr.

At the event, the author will be joined by poet Molly Cross-Blanchard for a conversation about the inventive style of the book, the author’s writing process, the connection of Indigenous Peoples to land, and the permanence of culture, language and ceremony as a form of resistance to displacement.

Click HERE to purchase “Avenue of Champions” by Conor Kerr

Five generations after the Canadian Government dissolved the Papaschase First Nation, Daniel makes his way in the neighbourhood referred to as the “Avenue of Champions,” or 118 Avenue in Edmonton—where continual displacement has reverberating effects and where Indigenous youth contend with urban constructs and colonial spaces.

Daniel is a young Métis man searching for a way to exist in a world of violence and systemic racism. He hits obstacles at every turn—whether in the child welfare system, at university, or in government jobs. The narrative unfolds through stories told from the perspectives of various people in Daniel’s life. There’s Granny, a moonshiner turned marijuana grower who sells pot brownies to the other residents at her old folks’ home. There’s Charlie, Daniel’s hardened yet big-hearted brother; and there’s Jason, a boy that often tries to escape the violence of group home with Daniel.

Avenue of Champions is a novel with an inventive style that utilizes humour to express the tenacity of the characters. It is essential reading for anyone interested in the history of the land on which the City of Edmonton sits, with its legacies of displacement as well as its stories of triumph—stories of relationships with elders and knowledge keepers, and ultimately, of re-staking land claims on traditional territories.

Conor Kerr (he/him) is a Métis/Ukrainian educator, writer and harvester. He is a member of the Métis Nation of Alberta, part of the Edmonton Indigenous community and is descended from the Lac Ste. Anne and Fort des Prairies Métis communities and the Papaschase Cree Nation.

His Ukrainian family settled in Treaty 4 territory in Saskatchewan. Conor works as the Executive Director of Indigenous Education & Services at snəw’ eył leləm’̓ (Langara College) and lives in Vancouver on the unceded territories of the Squamish, Tsleil-Waututh and Musqueam First Nations.

In 2019, Conor received The Fiddlehead’s Ralph Gustafson Poetry Prize and in 2021, The Malahat Review’s Long Poem prize. His writing has been published widely in literary magazines and anthologized in Best Canadian Stories 2020 and Best Canadian Poetry 2020.

His first two books were published in 2021: the poetry collection, An Explosion of Feathers (Bookland Press) and debut novel Avenue of Champions (Nightwood Editions).

He has a forthcoming poetry collection tentatively titled Old Gods for publication with Nightwood Editions in 2023.