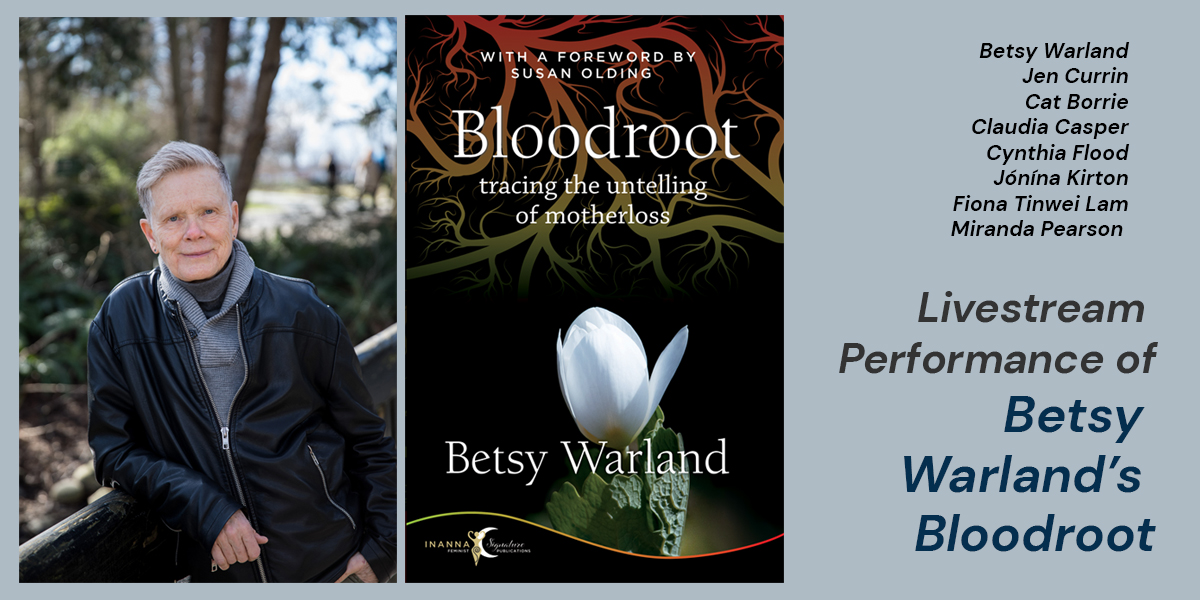 In Bloodroot, Betsy Warland traces how a mother and daughter’s shared gender can shape the very anatomy of narrative itself.

In her mother’s final year, Warland quietly discovered how to disentangle a crucial, concealed story that had rendered their relationship disconnected and fraught. Warland weaves a common ground that moves beyond duty and despair, providing both questions and guideposts for readers, particularly those faced with ageing and ill parents and their loss.

The 2000 edition of Bloodroot broke new ground in memoir form and uncharted storytelling. The 2021 edition, reprinted by Inanna for the launch of its Inanna Signature Feminist Publications series, includes a new foreword by Susan Olding and a new essay by Warland that explores subsequent questions, insights and tenderness only the passage of time can enable.

Regarding her 2020, Lagoon Lagoon/lost in thought, the Vancouver Sun wrote of her “magisterial (and yet, paradoxically, minimalist) distillation,” and The Ormsby Review: “her command of art and language is that of a virtuoso.”

The Winnipeg Free Press review of her 2016 book, Oscar of Between: A Memoir of Identity and Ideas, called it “an astonishing book by a truly luminous writer.” A mainstay for writers and teachers, the second edition of Warland’s Breathing the Page: Reading the Act of Writing (with new added material) will be released in 2022.

This 2021 second edition of Warland’s first memoir, Bloodroot—Tracing the Untelling of Motherloss (2000), includes a new, long essay by Warland reflecting on what Bloodroot taught her in terms of craft and the nature of narrative over the past twenty years.

Former director and mentor in of the Writer’s Studio and Vancouver Manuscript Intensive, Warland received the City of Vancouver Mayor’s Literary Excellence Award in 2016. The creation of an annual book award honouring Warland, The VMI Betsy Warland Between Genres Award, will be launched in 2021.

​​Jen Currin has published five books, including Hider/Seeker: Stories and the poetry collections The Inquisition Yours and School. They live on unceded Qayqayt, Musqueam, and Kwantlen Nation territories (New Westminster) and teach creative writing and English at Kwantlen Polytechnic University.

Cat Borrie earned a Certificate in Creative Writing from SFU, mentored by the miracle who is Betsy Warland. Cat is the author of the lyrical memoir, the long hello~ memory, my mother, and me, published by Simon & Schuster Canada.

Her recently completed manuscript, the origin of other ~a grimm of poems, composed from the original 156 Folk and Fairy Tales of The Brothers Grimm, takes the form of erasure or found poems, and brings a decidedly feminist perspective to these traditional tales.

Claudia Casper is the author of three novels, short fiction, and creative non-fiction. Her most recent, The Mercy Journals, a post climate-crisis, post-apocalyptic story of murder, memory and hope, won the 2017 Philip K. Dick Award for distinguished science fiction.

She has been a faculty member at the Iceland Writer’s Retreat, Whistler’s writer-in-residence, and a speaker at TedX Vancouver. Her best-selling debut novel, The Reconstruction, is being adapted for film in a France/Canada co-production.

Cynthia Flood: I’ve known Betsy so long that I don’t remember the where or how of meeting — probably some feminist activity of the 1970s/1980s — but it’s a treasured friendship.

I’ve published five books, and You Are Here: Selected Stories will appear from Biblioasis soon.

Jónína Kirton, a Red River Métis/Icelandic poet, graduated from the SFU Writer’s Studio in 2007. She has since published two collections of poetry with Talonbooks; page as bone ~ ink as blood in 2015, and An Honest Woman in 2017 (a finalist for the Dorothy Livesay Poetry Prize.)

A late-blooming poet; at sixty-one she received the 2016 City of Vancouver’s Mayor’s Arts Award for an Emerging Artist in the Literary Arts category. Her third book, Standing in a River of Time, a poetic memoir, is forthcoming in 2022 (again with Talonbooks.)

Fiona Tinwei Lam has authored three poetry collections and a children’s book, and collaborated on award-winning poetry videos that have screened at festivals internationally.

She also edited the anthology, The Bright Well: Contemporary Canadian Poems on Facing Cancer. Shortlisted for the City of Vancouver Book Award and thrice selected for BC’s Poetry in Transit, her work appears in over 40 anthologies. She teaches at SFU’s Continuing Studies.

Miranda Pearson moved to Vancouver from England in 1991. Her poetry has been published widely in literary journals and anthologies, and she is the author of five books: Rail, The Fire Extinguisher, Harbour, The Aviary and Prime. The Aviary won the Alfred G.Bailey prize, Harbour was a finalist for the 2010 BC Book Prize and The Fire Extinguisher for the same prize in 2016.

Miranda currently serves as Poetry Editor for Taproot Press, a new publishing house based in Edinburgh. Her most recent collection is Rail, published in 2019 by McGill-Queen’s University Press.