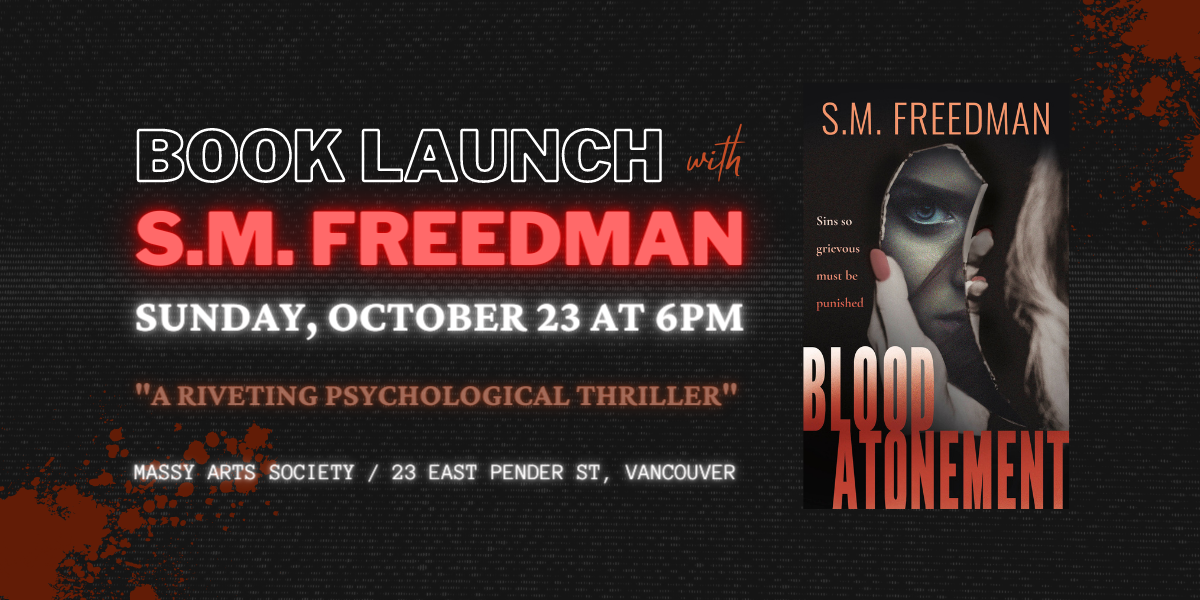 In conversation with novelist Amber Cowie, Freedman takes us through a reading that will have readers by the edge of their seat as they follow the story of a protagonist who finds herself as the suspect in a gruesome series of murders.

Registration is free, open to all and mandatory for entrance.

Registration is free, open to all and mandatory for entrance. The gallery is wheelchair accessible and a gender-neutral washroom is on-site.

Covid Protocols: Attendees must provide proof of vaccination, wear a mask (N95 masks are encouraged and recommended as they offer the best protection), and consent to having their temperature checked at the front door. We ask if you are showing symptoms, that you stay home. Thank you kindly.

In a riveting psychological thriller for readers of Lisa Unger and Karin Slaughter, Grace’s healing solitude is shattered when she becomes a suspect in a gruesome series of murders.

Grace DeRoche escaped the fundamentalist Mormon compound of Brigham and worked to prosecute its leaders. But when loyalists, including her own family, commit mass suicide to avoid jail, Grace retreats into solitude. Racked with guilt and suffering from dissociative identity disorder brought on by childhood abuse, Grace’s life is fragmented and full of blind spots. Dissociative triggers are everywhere, and she never knows when an alter personality will take the reins.

When other Brigham escapees die under suspicious circumstances, Grace’s tenuous hold on reality crumbles. Notes left at each scene quote scripture and accuse the deceased of committing sins so grievous that atonement can only be achieved through the spilling of blood. As evidence mounts against her and one of her alter personalities becomes the prime suspect, Grace must determine if she’s a murderer … or the next victim.

S.M. Freedman studied at the American Academy of Dramatic Arts in New York and spent years as a private investigator on the not-so-mean streets of Vancouver, before returning to her first love: writing. Her debut novel, The Faithful (Thomas & Mercer), is an International Amazon Bestseller and was selected by Suspense Magazine as a “Best Debut of 2015.” The sequel, Impact Winter, was published in 2016, and she is currently working on the third and final instalment in the series. She is also the author of The Day She Died (Dundurn Press, 2021) and the forthcoming Blood Atonement (Dundurn Press), which tells the story of a woman who, when other Fundamentalist Mormon Church escapees are killed, must determine if her alter personality is the murderer, or if she’s the next victim. She lives in Vancouver with her husband and two children, and is a proud member of Sisters in Crime, Crime Writers of Canada, International Thriller Writers, and Mystery Writers of America.

Amber Cowie is a novelist living in a small town on the west coast of British Columbia. Her work has appeared in The New York Times, Salon, The Globe and Mail, Crime Reads, and Scary Mommy and has been endorsed by numerous bestsellers including Samantha M. Bailey, Shannon Kirk, Kerry Lonsdale, Catherine McKenzie, Robyn Harding, and Blake Crouch. Her first novel, Rapid Falls, was a Whistler Book Awards nominee, hit number one overall on Amazon, and was a top-100 bestselling Kindle book of 2018. She is a mother of two and reader of many. She likes skiing, running and making up stories that make her internet search history unnerving. Her next book, Last One Alive, will be released by Simon and Schuster Canada in summer 2022.

Have you noticed our by donation ticket option? Massy Arts Society is 100% funded by Massy Books, an Indigenous woman-owned and operated bookstore on the unceded territories of XwMuthkwium (Musqueam), Sḵwx̱wú7mesh (Squamish) and Selilwitulh (Tsleil-Waututh) Nations. To date we haven’t received any operating funds from any grants and are now providing the option for folks to contribute to keeping our events accessible and doors open. All proceeds from your donation will go towards operation costs of our community hub while we focus on supporting the practices of Indigenous and over-excluded artists. Consider donating when you register for your next event.

Proceeds to Massy Arts Society go towards operation costs so we can keep our events free and accessible.