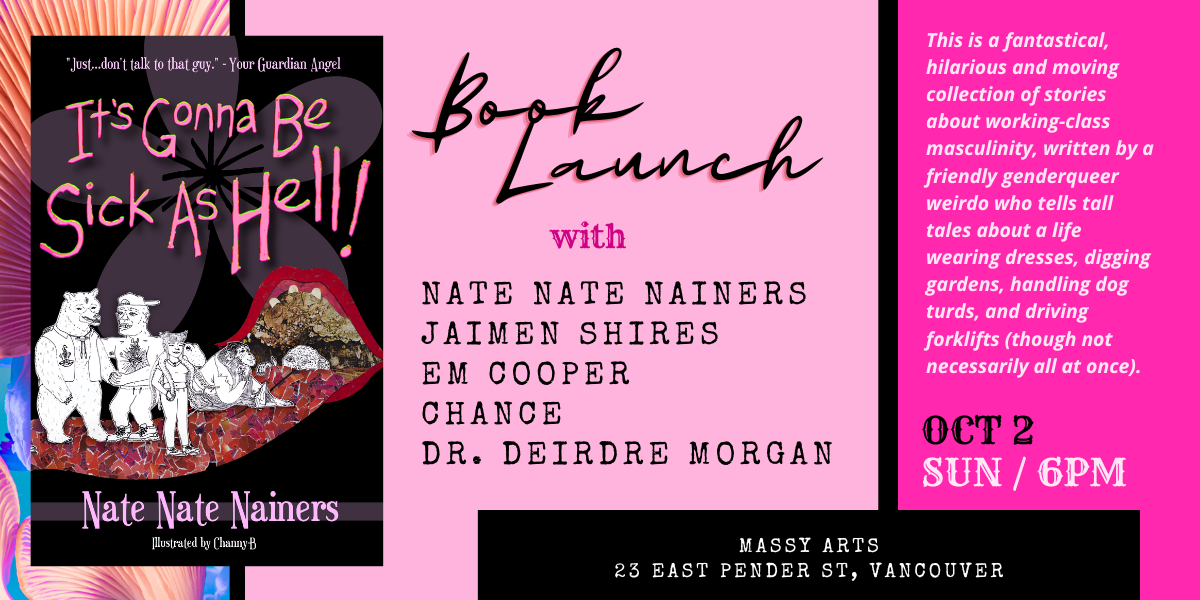 On Sunday, October 2 at 6pm, join Massy Arts, Massy Books, and Wharfinger’s Press for the launch of the debut collection “It’s Gonna Be Sick As Hell!” by genderqueer author Nate Nate Nainers.

At this in-person event, Nainers will be joined by author + publisher Jaimen Shires, illustrator + musician Chance, Jew’s Harp musician Dr. Deirdre Morgan, and comedian Em Cooper for an evening to celebrate storytelling, and to discuss the hope of a newer, friendlier and weirder conversation about gender.

This event is free + open to all of our community, and registration is mandatory.

The gallery is wheelchair accessible and a gender-neutral washroom is on-site.

Covid Protocols: For all in-person events, attendees must provide proof of vaccination, wear a mask (N95 masks are encouraged and recommended as they offer the best protection), and consent to having their temperature checked at the front door. We ask that if you are showing any symptoms, that you stay home. Thank you kindly.

You can purchase “It’s Gonna Be Sick As Hell!” by Nate Nate Nainers at the event.

It’s Gonna Be Sick As Hell!

This is a fantastical, hilarious and moving collection of stories about working-class masculinity, written by a friendly genderqueer weirdo who tells tall tales about a life wearing dresses, digging gardens, handling dog turds, and driving forklifts (though not necessarily all at once).

Throughout this scuttlebutt, you will also find Nate’s fantasies, reflections, and some surprise promises of hope for a newer, friendlier and weirder conversation about gender.

Nate Nate Nainers has no formal qualifications in gender studies, sociology, anthropology or philosophy, but is a self-described genius with a natural aptitude for delusions of grandeur (afforded to them by their schizoaffectiveness).

“…one thing that I love about It’s Gonna Be Sick As Hell! is a lot of it takes place in these working-class job scenarios and they’re really interesting interactions. It’s like you’re taking a construction site or a factory floor as a legitimate place of inquiry, both literary and slapstick-wise…I don’t see a lot of stories that take place in those sorts of environments.” – Kier Adrian Gray, Kier Here Podcast

Nate Nate Nainers is a community builder in the Lower Mainland of British Columbia. They have managed the Parade of Lost Souls, produced inclusive cabarets, and currently coordinate a multitude of wizards, and the League of Fuddy Duddies with Silly Hats. She believes in building bridges with all types, and that having fun is a very effective way to build a bridge. Nainers is queer and schizoaffective and likes that about himself very much.

Jaimen Shires is the founder of Wharfinger’s Press and author of numerous titles, including Bird Droppings: A Collection of Avian Anecdotes, which was nominated for a Leacock Medal in 2021. Their poetry has been exhibited as part of public art installations by the City of Maple Ridge, where he currently resides.

Chance is a multidisciplinary rapscallion who can be distinguished from flotsam and jetsam upon the river of life by a series of odd sounds, inky flourishes, spectral gestures and unlikely turns of phrase which perpetually rearrange themselves in various permutations and combinations in hopes of eliciting pleasure, wonder or perhaps just a more palatable sorrow.

Dr. Deirdre Morgan is a leading scholar and performer of the Jew’s Harp, an ancient, mouth-resonating musical instrument found in many cultures around the world. Deirdre has studied the instrument since 2005, speaking, performing, and conducting award-winning research in over a dozen countries.

Em Cooper is a queer, non-binary stand-up comedian who has performed in bars, blanket forts, and barns as well as a few theatres across Canada as the host of Rape is Real & Everywhere, a comedy show by survivors which toured pre #metoo and won Spirit of the Fringe at Vancouver Fringe Fest in 2019. They currently commute via motorcycle to visit their partner in Langley for that sweet, suburban subdivision subversion.