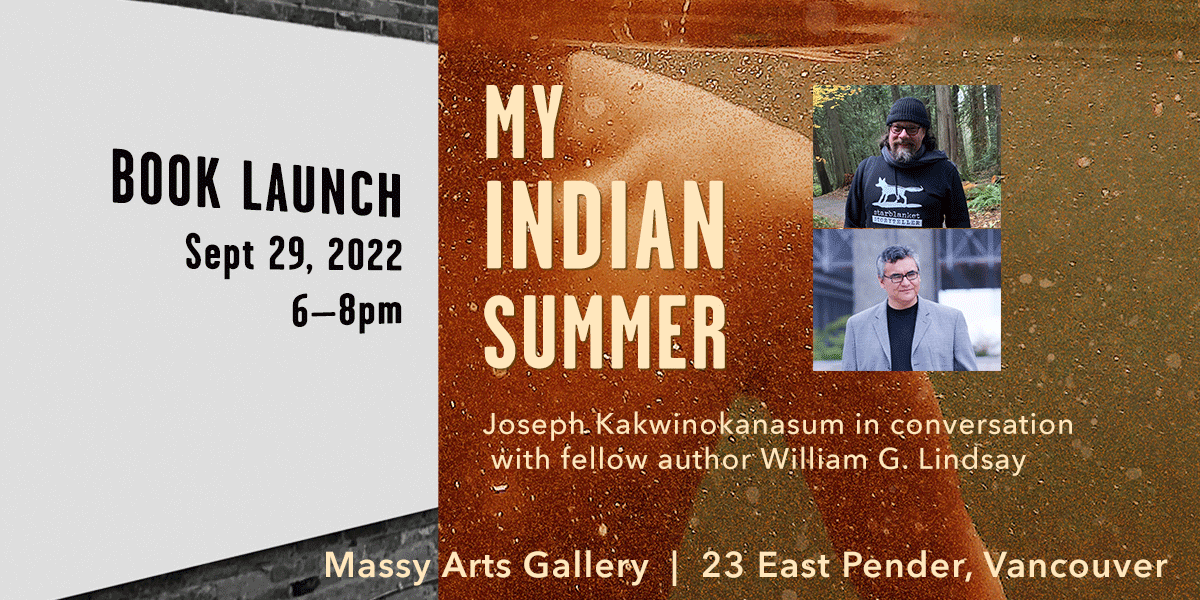 On Thursday, September 29 at 6pm, join Massy Arts, Massy Books, and writer Joseph Kakwinokanasum for the launch of his new book My Indian Summer (2022), a complex story of a boy at a crossroads on a journey to understanding that some villains are also victims—and that while reconciliation may not be possible, survival is.

In conversation with educator and Director of the Office for Aboriginal Peoples at SFU, William Lindsay, Kakwinokanasum will delve into the experiences that inspired this coming-of-age novel and offer intimate insight into his own experiences being raised by a single mother with seven abittawokosisan (half-breed) siblings. Following the launch, Kakwinokanasum will also be available for a book signing.

Registration is free, open to all and mandatory for entrance.
Purchase My Indian Summer by Joseph Kakwinokanasum.

The gallery is wheelchair accessible and a gender-neutral washroom is on-site.

Covid Protocols: Attendees must provide proof of vaccination, wear a mask (N95 masks are encouraged and recommended as they offer the best protection), and consent to having their temperature checked at the front door. We ask if you are showing symptoms, that you stay home. Thank you kindly.

For Hunter Frank, the summer of ’79 begins with his mother returning home only to collect the last two months’ welfare cheques, leaving her three “fucking half-breeds” to fend for themselves. When his older sister escapes their northern BC town and his brother goes to fight forest fires, Hunter is on his own, with occasional care coming from a trio of elders—his kohkums—and companionship from his two best friends.

It’s been a good summer for the young entrepreneur, but the cash in the purple Crown Royal bag hidden in his mattress still isn’t enough to fund his escape from his monstrous mother and the town of Red Rock. As the Labour Day weekend arrives, so does a new friend with old wisdom and a business opportunity that might be just a boy at the crossroads needs.

Joseph Kakwinokanasum is a member of the James Smith Cree Nation who grew up in the Peace region of northern BC, one of seven children raised by a single mother. A graduate of SFU’s Writers Studio, his short story “Ray Says” was a finalist for CBC’s 2020 Nonfiction Prize. His work has appeared in The Humber Literary Review and Resonance: Essays on the Craft and Life of Writing. In 2022, he was selected by Darrel J. McLeod as one of The Writers Trust of Canada’s “Rising Stars.” He now lives and writes on Vancouver Island. Loosely based on his own childhood, My Indian Summer is his first novel.

Indigenous writer and educator William G. Lindsay (Cree-Stoney) B.Ed. M.A. has worked for a quarter century in post-secondary education. He has served as a college professor, university educator, researcher, published writer, student services coordinator, Associate Director, Director, and Senior Director across the following institutions: Concordia University, Simon Fraser University, University of British Columbia, Douglas College, Institute of Indigenous Government, and Native Education College. William has presented at twenty academic conferences during his career and has written a host of peer-reviewed publications, two books, and numerous newspaper travel essays. William’s recent book, ‘Rez Dog Blues & The Haiku: A Savage Life in Bits and Pieces’, has been chosen as a ‘Finalist’ for the prestigious Whistler Independent Book Awards for 2022. It has been called “a new classic of Indigenous literature” by The Vancouver Sun and “An Indigenous Odyssey for TRC Times” by The Province. William lives in Burnaby, British Columbia with wife, Ruth.

Have you noticed our by donation ticket option? Massy Arts Society is 100% funded by Massy Books, an Indigenous woman-owned and operated bookstore on the unceded territories of XwMuthkwium (Musqueam), Sḵwx̱wú7mesh (Squamish) and Selilwitulh (Tsleil-Waututh) Nations. To date we haven’t received any operating funds from any grants and are now providing the option for folks to contribute to keeping our events accessible and doors open. All proceeds from your donation will go towards operation costs of our community hub while we focus on supporting the practices of Indigenous and over-excluded artists. Consider donating when you register for your next event.