Gallery Exhibition / “We Are the Land, We Are the Water” by Mike Alexander 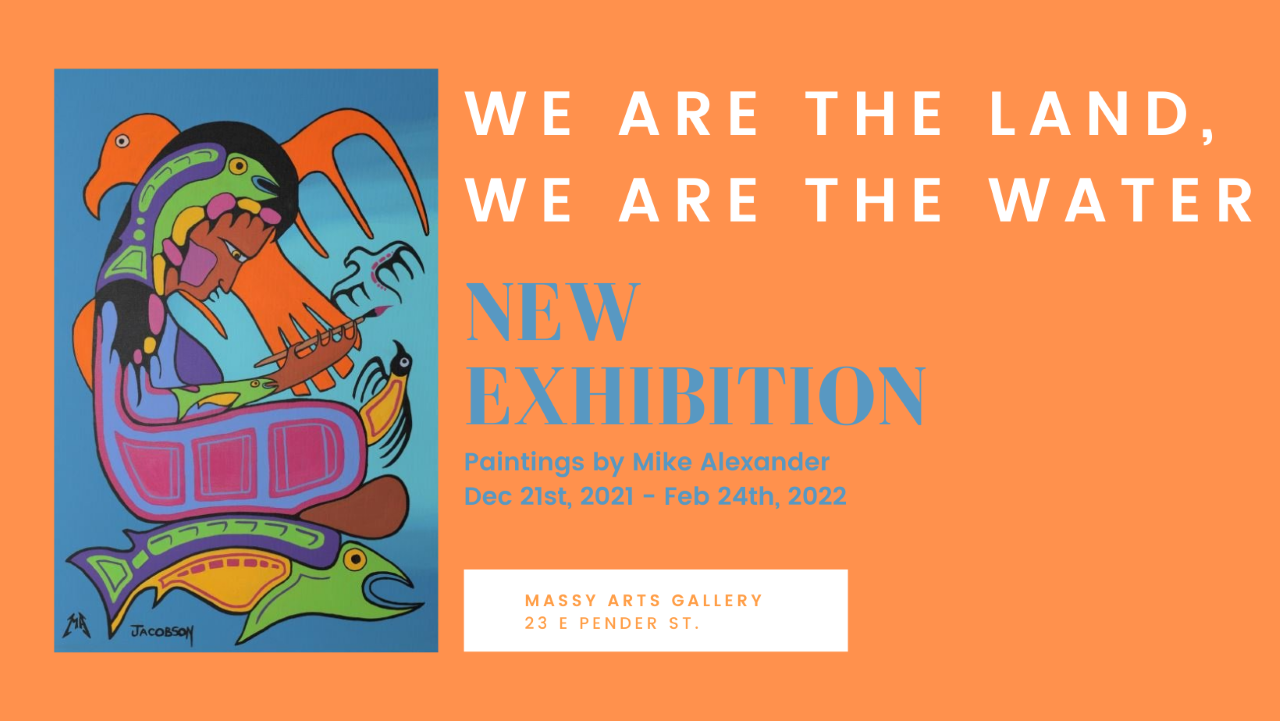 Dec 21st – Feb 24th, Massy Arts will host a new show by emerging Anishinaabe visual artist and writer, Mike Alexander. “We Are the Land, We Are the Water” is a visual investigation of the quiet search amongst the rubble of colonization, and showcases ten new pieces by the artist.

The Massy Arts Gallery is located at 23 East Pender Street in Chinatown, Vancouver. The gallery is open Tuesday to Saturday, 12pm to 5pm.

My reality is one of quiet searching amongst the rubble of colonization. My body of work that started in 2015 and continues today captures emotions as they relate to my hopes, dreams, and my efforts to find meaning and belonging within my culture.

My work involves earnest attempts to discover forgotten pages of Canadian history as well as my own family history in hopes of hearing my ancestors sing, drum, and pray. My paintings are an attempt to communicate with parents I will never hold close.

My stories are spoken in a language as close to Anishinaabemowin as I know. I am a part of the fourth wave of the Woodlands School of Art and I see hope, life and reconnection through art.

Mike Alexander is an emerging Anishinaabe visual artist and writer originally from Swan Lake First Nation in Treaty #1 Territory, currently residing on the traditional and unceded lands of the Tk’emlúps te Secwepemc. Adopted out to a non-Indigenous family shortly after birth, Mike is a 60’s Scoop survivor, a second-generation Residential School survivor who grew up in Winnipeg, having no connection to his community, language or culture until his early 20’s.

He has attended the University of Victoria, the Victoria College of Art and the Vancouver Island School of Art. Mike is honoured to have received mentorship from master carver and recipient of the Order of BC Carey Newman (Kwagiulth) as well as master of the Woodlands School of Art, Mark Anthony Jacobson (Anishinaabe) who as a Pipe Carrier and Eagle Staff carrier, serves to transmit cultural knowledge as well as artistic skill to Mike to help guide him.

Mike has been the recipient of several generous grants from the Kamloops Arts Council, the First Peoples Cultural Council and the BC Arts Council and is currently practicing as a full time, internationally collected artist.

Since 2015, his large acrylic paintings have received four solo exhibitions in Vancouver, Victoria, and Kamloops as well as participation in several group shows across Canada and the United States. Mike identifies very strongly with his Ojibwe roots as a student of the Woodlands School of Art. He celebrates his ongoing transformation and reclamation of culture using art as a process of decolonization and cultural revitalization.

The Massy Arts Gallery is open from Tuesday to Saturday, 12pm to 5pm, at 23 East Pender Street, in Chinatown, Vancouver. Entrance is free and masks are mandatory.