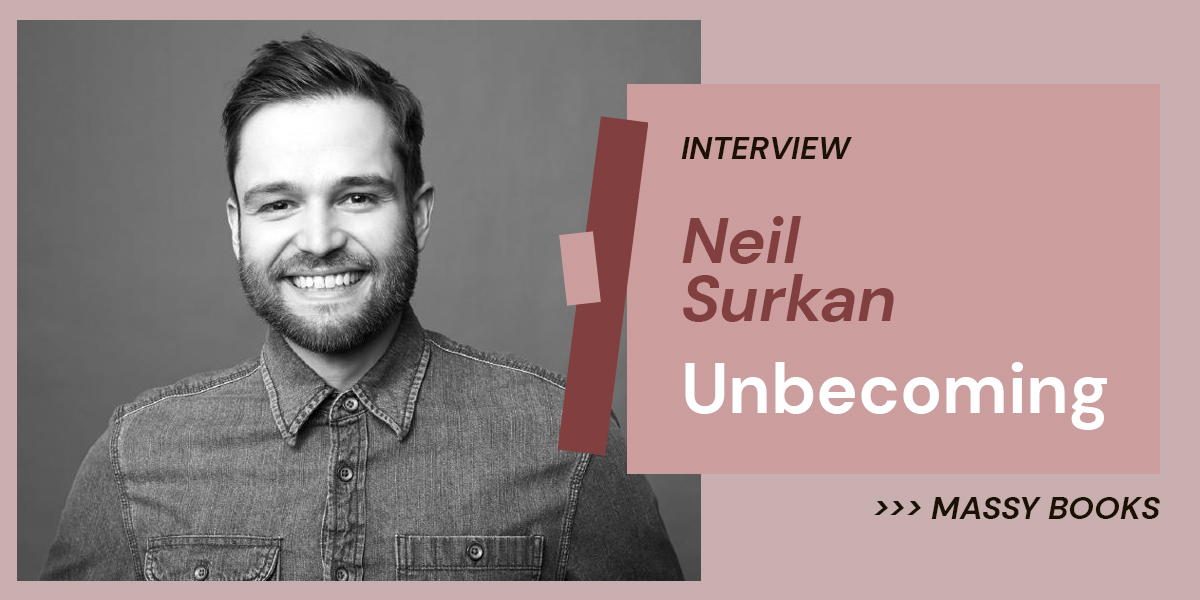 The book launch will be hosted in-person at the Massy Arts Gallery, at 23 East Pender Street in Chinatown, Vancouver. The event is free, and registration is mandatory.

To understand more about Surkan’s literary process, Community Engagement Coordinator Rafael Zen interviewed the author for Massy Books, investigating poetry that brings hope, amazement, and the possibility of un-becoming (transformation) to its audience.

Neil Surkan – Wounded places, and poetry as a radical act of optimism

Rafael Zen – Your book synopsis addresses the worsening of a wounded Earth. To you, these poems cling to hope while the world deteriorates, transforms, and grows less hospitable from moment to moment. Do you think it is a poet’s job to bring some sense of hope to the audience?

Neil Surkan – I don’t think it’s a poet’s job to give readers a sense of hope, but I like when poems make me feel wonder/amazement/awe, and I’d be pleased to hear that any of those states got inspired by a poem of mine.

My hope is that Unbecoming sounds joyful even when its subject matter tips into despair. The poems are, of course, intentionally structured, and for me that quality of arrangement – of listening for, as much as to, words’ tricky, quiet melodies – is a radical act of optimism.

It might seem impractical to savour the music of words when the world seems so busted, but without minute acts of savouring, I think getting invested in un-busting (healing?!) the world becomes even less possible.

RZ – Some of your poems, like “Unbecoming”, attempt to look poetically into ordinary events. Passages like “mealy ornamental apples snick in tiny, frost-shocked trees potted around the patio”; or “vomit on the paving stones”; and “next to this foreclosed casino, a dormant bog shallow breathes.” are scenes borrowed from an urban-industrial society that you are a part of. As a poet, and a sensitive artist navigating through the world, what do you think these images reveal from your book’s theme?

NS – To me, the poem “Unbecoming” cautions against ordinariness – against seeing the present’s myriad, infinitely complex shifts and changes as predictable to such an extent that they cease to be remarkable – lest the ordinary be deemed unworthy of saving.

Unlike most of the poems in the collection, I think “Unbecoming” tells what it wants its images to reveal (these lines are also from the poem):

the world appears, exceeds, and un-
becomes too quickly for certainty,
just enough for love

RZ – Why Unbecoming as the title of your book? Why do you think this poem encapsulates the idea behind the work? If this was not the poem to be referred to in the title, what other poem could suggest a title, and why?

NS – I chose the title Unbecoming for two reasons:

ON THE ONE HAND, regarding the literal definition of “unbecoming” – “not fitting, not appropriate, unseemly” – the book features a number of poems in which the speaker asks “unbecoming” (unseemly) questions concerning legacy and transformation: how to renovate the colonial, capitalist, and heteronormative contexts in which I, a queer white settler, grew up?

How might loyalty to and respect for my parents, and my parents’ parents, coexist with new perspectives that radically shift and, in some instances, reject, the way I was raised?

ON THE OTHER HAND, the title suggests that un-becoming might be an apt word to describe a particular kind of transformation: the act of becoming someone different than you were raised to be. Choosing to live in a way that diverges from the engrained behaviours and beliefs inherited from one’s family is the action of un-becoming.

COMBO: when, throughout the book, speakers choose to not embody their inheritances, that struggle is portrayed as an unbecoming (ugly) act of un-becoming (transformation). Throughout the collection, speakers grapple with how to un-become what they have inherited.

POSTSCRIPT: as a relatively new dad, I’m constantly thinking about what my kid will un-become with regards to my own parenting. What of the legacy I pass on will be hardest to shrug off? To shed? To reject?

The title came first for this book, so I truly can’t imagine it being called anything else!

RZ – In your bio you say you love poems that play around bewildering approaches to form. How do you think it was your approach to form in these poems? Do you think they all address the same research, as a writer, into finding a personal form for your literary production?

NS – Many of the poems in Unbecoming are, I think, a little more frank and personal than the poems in my first book, On High. While writing the collection, I returned again and again to Jack Gilbert, Henri Cole, Natalie Shapero, James Arthur, and Rowan Ricardo Phillips for inspiration because I love the way each lures the reader into a dissonant reality with lines that appear, at first, to be conversational (the music sneaks up on you!).

That said, I also kept poets like Peter Gizzi, Julie Joosten, Mark Ford, Emily Berry, Michael Hofmann, Carl Phillips, AE Stallings, Ange Mlinko, Paul Batchelor, Layli Long Soldier, Sarah Howe, and Mary Jean Chan close by because they make my brain fizz (and my heart open). I love beginning to write after being overwhelmed by what others have shown to be possible.

In other words, finding a “personal form” for Unbecoming felt akin to designing a door that opens in multiple directions. The stanzas are trying to make room for multiplying perspectives and approaches because the newfound accountability I felt when I became a father knocked my sense of what poetry might/should do off-kilter.

Off-kilterness might best characterize these poems: they strive to explore the limits of self-reflexivity, to be quietly but lovingly queer, to marvel and grieve simultaneously, and to look to the future by reflecting on the past.

RZ – If you could choose one verse of one poem that you think encapsulates the core message of Unbecoming, what would that verse be? Could you explain to our readers why you chose this verse?

Subtler, subtler, beat our hearts
down aisles of cluttered glitz. (from “Bewilderment”)

I think subtler, subtler is onomatopoetic: it really does sound like a heartbeat. Imagine! Inside each of us, there’s a call to focus more minutely, to revel in the mystery of our lives, to relinquish a fixed sense of what it means to live a good life, to deepen our attention – even as chip bags and billboards clutter the periphery.