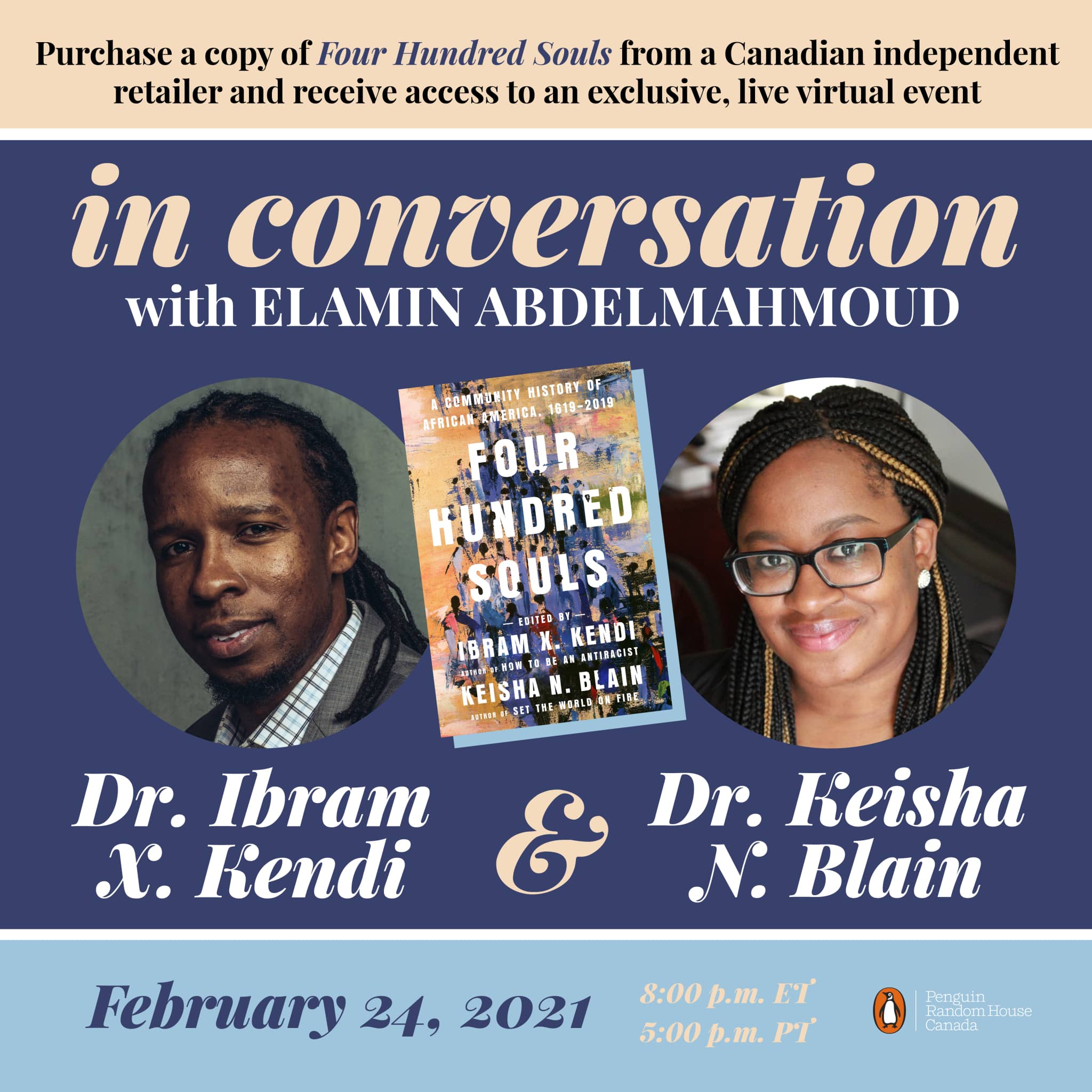 A chorus of extraordinary voices comes together to tell one of history’s great epics: the four-hundred-year journey of African Americans from 1619 to the present—edited by Ibram X. Kendi, author of How to Be an Antiracist, and Keisha N. Blain, author of Set the World on Fire.

Purchase a copy of Four Hundred Souls from independent bookstore Massy Books and receive access to this exclusive, live event with the editors in conversation with Elamin Abdelmahmoud. Massy Books is offering 20% Four Hundred Souls for the month of February as part of their Black History Month reading list. Check out the full list here: https://t.co/rIisIWAwSz

Ibram X. Kendi is the Andrew W. Mellon Professor in the Humanities at Boston University and the founding director of the BU Center for Antiracist Research. He is a contributing writer at The Atlantic and a CBS News correspondent. He is the author of many books including Stamped from the Beginning: The Definitive History of Racist Ideas in America, which won the National Book Award for Nonfiction, and three #1 New York Times bestsellers, How to Be an Antiracist; Stamped: Racism, Antiracism, and You, co-authored with Jason Reynolds; and Antiracist Baby, illustrated by Ashley Lukashevsky. In 2020, Time magazine named him one of the 100 most influential people in the world.

Keisha N. Blain is an award-winning historian, professor, and writer. She is currently an associate professor of history at the University of Pittsburgh, the president of the African American Intellectual History Society, and an editor for The Washington Post’s “Made by History” section. Her writing has appeared in popular outlets such as The Atlantic, The Guardian, Politico, and Time. She is the author of Set the World on Fire: Black Nationalist Women and the Global Struggle for Freedom and Until I Am Free: Fannie Lou Hamer’s Enduring Message to America.

Elamin Abdelmahmoud is the host of CBC’s weekly pop culture podcast POP CHAT, co-host of CBC’s political podcast PARTY LINES, and a frequent culture commentator for CBC News. He’s a culture writer for BuzzFeed News, where he also writes Incoming, the daily morning newsletter. His work has appeared in the Globe and Mail, Maclean’s, and Rolling Stone.