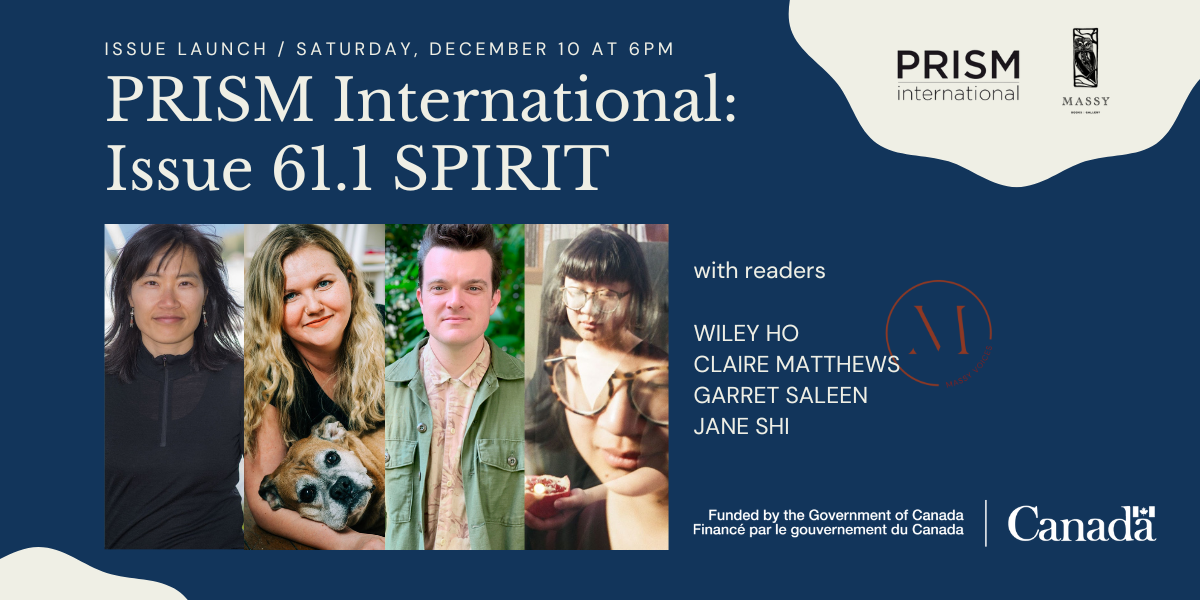 On Saturday, December 10 at 6pm, join Massy Arts Society, Massy Books and PRISM International for the launch of issue 61.1: SPIRIT. From childhood songs, the figures from dreams that speak in gibberish, and moments of déjà vu that feel like coming home, this issue asks writers what haunts them and what echoes are in their midst.

To celebrate the launch of this issue we have an impressive lineup of writers from this issue and past contributors including: Wiley Ho, Claire Matthews, Garret Saleen and Jane Shi.

Registration is free, open to all and required for entrance.
Pick up a copy of Issue 61.1 SPIRIT at the event.

Registration is free, open to all and required for entrance. The gallery is wheelchair accessible and a gender-neutral washroom is on-site. Please view our Accessibility page for parking, seating, venue measurements and floor plan, and how to request ASL interpretation.

Covid Protocols: Masks keep our community safe and are mandatory (N95 masks are recommended as they offer the best protection). We ask if you are showing symptoms, that you stay home. Thank you kindly.

Wiley Wei-Chiun Ho was born in Taiwan and moved to Canada when she was nine. Identifying as Generation 1.5, Wiley inhabits the haunted space between places, cultures, and identities. Her stories and essays have appeared in anthologies and magazines. Wiley is currently at work on her first book, a memoir about growing up in a Taiwanese-Canadian “astronaut” family.

Claire Matthews is bi writer, editor, and educator who lives on the unceded territories of the Squamish, Musqueam, and Tsleil-Waututh nations. Her work is forthcoming in Prairie Fire, The Fiddlehead, and CV2. Her poetry was longlisted for the CBC Poetry Prize and shortlisted for The Fiddlehead’s 2018 and 2019 Ralph Gustafson Prizes for Best Poem. In her spare time, she makes soap and drinks bourbon.

Garrett Saleen is a writer and visual artist from Southern California. His fiction has appeared in Santa Monica Review, Funicular, The Collagist, and other places. His collage art has been featured on the covers of literary journals and in galleries around the Pacific Northwest. His art can be found @jan_homm on Instagram. He lives in Seattle, where he has completed his first collection of short fiction.

Jane Shi is a queer Chinese settler living on the unceded, occupied, and stolen territories of the Musqueam, Squamish, and Tsleil-Waututh First Nations. Her debut chapbook is Leaving Chang’e on Read (Rahila’s Ghost Press, 2022). Her writing has appeared in Disability Visibility Blog, Briarpatch Magazine, The Puritan, and among others. She also organizes Masks4EastVan, a grassroots mutual aid project that distributes high-quality masks to neighbours in East Van and beyond. She wants to live in a world where love is not a limited resource, land is not mined, hearts are not filched, and bodies are not violated.

PRISM international is a quarterly magazine out of Vancouver, British Columbia, whose office is located on the traditional, ancestral, and unceded territory of the xʷməθkʷəy̓əm people. Our mandate is to publish the best in contemporary writing and translation from Canada and around the world. Writing from PRISM has been featured in Best American Stories, Best American Essays and The Journey Prize Stories, amongst other noted publications.

Toke Adejoye is a lawyer and recent transplant from Lagos, Nigeria, to Vancouver, where she is currently pursuing a MFA in Creative Writing at the University of British Columbia. She enjoys documenting pictures of sunrises and sunsets and is always on the lookout for unusual fictional worlds to explore.

Adrian Matias Bell is one of the managing editors at PRISM international. He is a queer writer and musician living on the unceded territory of the Musqueam people. Originally from California, he is a current MFA candidate at the University of British Columbia. His writing has appeared in Winter Tangerine and Qwerty and is forthcoming in Dialogist and Qu. He also makes music as Nightjars.

Vivian Li (she/her) is the Prose Editor at PRISM international, and is a queer writer, editor, singer-songwriter, and interdisciplinary artist. Her creative works are forthcoming or published in The New Quarterly, The Massachusetts Review, and The Fiddlehead, among others. She is a MFA candidate at UBC, and her debut chapbook, Someday I Promise I’ll Love You (845 Press) as well as her directorial/screenwriter debut short film, In Silence, We Sing will be available in late winter 2022. She can be found at @eliktherain on Twitter.

Jasmine Ruff (they/them) is the poetry editor at PRISM international. They are a queer writer living on the ancestral and unceded lands of the hən̓q̓əmin̓əm̓ and Sḵwx̱wú7mesh speaking peoples. Currently, they are an MFA student at the University of British Columbia. They publish under the pseudonym “Clara Otto”. Their work has been published in The Puritan, Plenitude Magazine, The Waking, and elsewhere.