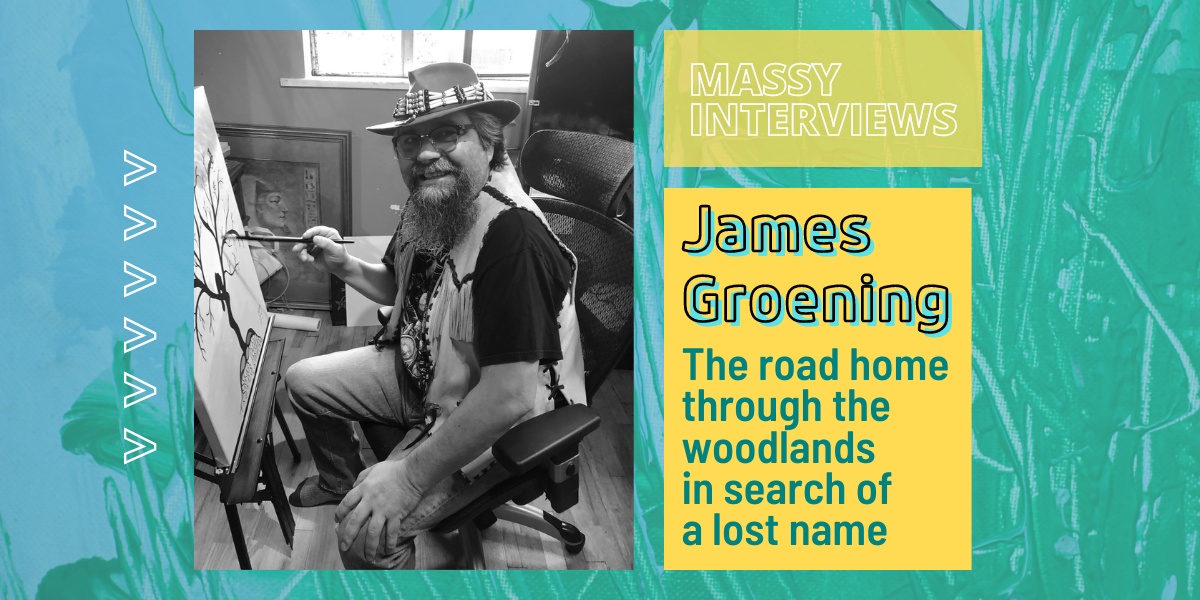 September 27 – November 10, Massy Arts will host “the road home through the woodlands in search of a lost name,” a new exhibition by artist James Groening (Blue Sky).

In this collection of paintings on canvas and drums, Groening both processes aspects of his Kahkewistahaw identity that are “lost in time” and the reclamation of it in reconnecting with his Indigeneity through his maternal mother and artists like Norval Morrisseau, Mark Anthony Jacobson and Loretta Gould. He is currently mentoring with Anishinaabe artist  Saul Williams.

Growing up in a farm community away from his Kahkewistahaw roots, Groening’s pieces use expressive colours—mystic blues, vibrant greens, shadow black—to explore the emotions, recollections and disconnect that are all part of his experience as a 60’s scoop survivor.

The Massy Arts Gallery is located at 23 East Pender Street in Chinatown, Vancouver.
The gallery is open Tuesday to Sunday, 12pm to 5pm.
Entrance is free, and masks are mandatory. The gallery is wheelchair accessible and a gender-neutral washroom is on-site.

To celebrate “the road home through the woodlands in search of a lost name,” Romila Barryman interviews Groening for Massy Arts, for a reflective conversation into familial memory, reclaiming his Indigeneity and how he hopes his journey offers a path for others to do the same.

James Groening / Something that happens in the blue sky

As the title of your show tells us, there is a lost name you’re in search of. But you’ve also found part of a name that is still revealing itself. Can you share more of this with us and how it informs your art?

I was given a name by my mushom (grandfather) when I was born, but through some difficult times—the separation of my parents, the death of my father by the age of four, separation from any Native contact and family—I lost it. I was lucky that my uncle knew some of my history and part of the name I was given at birth: Blue Sky.

Many years later, when I actually met my maternal mother, she asked me if I knew my name and I said, “Yes I know it’s Blue Sky” and she was shocked and amazed. But she also went on to say that wasn’t all of it. “There’s more to your name,” but she couldn’t remember it either. It had been more than 20 years.

So this is where the search for the lost name comes from. I believe that the lost part is a description. Something that happens in the blue sky. Like the eagle flies, the thunderbirds soars, the raven hides, the moon shines. These are examples of what could’ve been, so the search continues through my art.

You’ve also called the “missing half” of your life a search for your shadow. Who are the people who light up the path in front of you that casts this shadow?

The missing half, I guess, would be literal as I had a family on my mother’s side that I never knew: one sister, three brothers and, of course, my mother. When we grow up and learn who we are, what we love and respect and aspire to be, our family contributes to our interactions. We rub against one another, polish the rough edges, and at some point, we find who we are and our purpose.

I had some of this from growing up with my father‘s parents who are German. So I learned things from that perspective, but never from a Kahkewistahaw perspective, which was not something that was provided in that home. Now that I’ve made contact with my Kahkewistahaw side, I’m learning more about myself and where I come from but residential school really throws a wrench in the work—we lost a lot through residential schools.

How did rekindling your relationship with your sister inspire you to make the white tail doe drum?

I went hunting last year with my sister who is a very capable woman. I started hunting at a very young age: in ‘89 in the farmlands of Manitoba, and it grew to deer hunting when I was 12, moose hunting when I was 16 and I have a lot of good memories growing up hunting.

But now, I was 53 and I was going hunting with my sister for the very first time. We had such a good time travelling and hunting and talking together. The time went very fast. Even the first couple days when we didn’t see very much.

We did see one large female whitetail but she slipped into the bushes and that was that. So, we turned and followed the direction that she went and, sure enough, not long after, we saw another female whitetail standing as it were—just waiting for us, so we were able to keep her for our own. It was as if she was giving herself to us. So, we gave thanks and took her home.

This was the very first deer that me and my sister got and it needed a commemoration. So, I thought about the strength of the feminine role: how we come to know her as home as she gives life, protection and food.

I knew I wanted to capture that idea on a drum made from our very first deer together! So, this drum has a life-giving figure that shows the coming forth of life and in the branches a representation of my two nephews that my sister brought into the world protects her and has the promise of life.

How did the hummingbird come into your life and encourage your artistic practice?

I had an appreciation for West Coast art and I found myself at an auction and there was a hummingbird by Art Thompson. I liked it and I brought it home after a while. I thought I might try to draw it and the drawing turned out pretty good, I thought. So, I drew it again.

I’ve never been able to draw before so I was very surprised when what I was looking at was appealing! At first I believed it to be a magic pencil I had stumbled across and when the pencil began to get very short I thought to myself, “Well, that was fun.” But when I sharpened a new pencil, drawing still had appeal. That’s when I thought maybe I should pursue this a little more. So I did.

One thing you’ve emphasized is that the colours in your art is as important as the lines. Tell us about some of your colour choices and how they express the story you tell.

When we went to a pow wow a couple years ago, my nephew’s kids were getting ready to dance at their first. We needed to adorn their regalia with colours, so we asked my mother what our family colours were. She said that we had greens and yellows and blues and purples. That’s the best she could recall as she lost a lot through residential school.

So one of my first paintings was called The Bird Council of Colours. In that painting, there’s a bird that is getting his colours and there’s a family gathered around in a tree and there’s a bird flying out from the sun that has three colours in its tail: blue, pink and purple.

Those would be the colours in the next painting I did where there’s a large eagle with those colours on his cheek and in his feathers: blue, pink and purple. In the center of the eagle, there’s a man’s face similar to mine. I kind of thought of it as my colours because I love using them together. These colours—blue and pink, and purple and blue—play tricks on your eyes when combined closely. It seems like you’re searching for the correct depth and it keeps changing or vibrating. So when I find colour relationships like that, I try to accentuate them.

What do you hope people feel when they see this journey through your art?

I hope people feel moved: by the happiness in the vibrant colours; by the messages in the legends; by the storytelling in each image. I hope people are moved towards understanding my culture and its wisdom. Moved to action when dealing with the hard topics of the 215. Moved to learn their part in truth and reconciliation. We all have a part to play—Native and non-Native—because where I come from, we are both treaty people.

I also would like to encourage other 60’s scoop people to learn their culture, and the wonders and joy that it possesses. I hope that they, too, might be made more complete. I hope seeing the wonderful things the natives can provide through culture, teaching and the art they produce removes shame and implements pride.