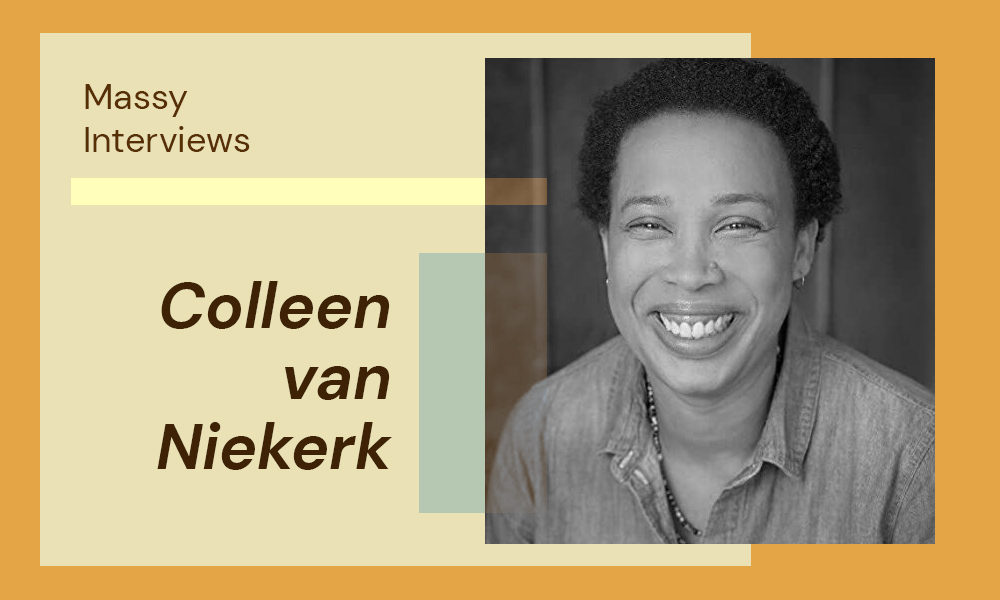 On Dec 2 (Thu) at 6pm, join Massy Arts, Massy Books, and Vancouver-based author Colleen van Niekerk for the in-person launch of her debut novel: A Conspiracy of Mothers (2021, Thomas Allen & Son). At the event, the author will read passages from the book, and address themes like womanhood, race, and South Africa’s politics.

Click HERE to purchase “A Conspiracy of Mothers” from Massy Books

To celebrate the author’s debut novel, and understand more about her inspirations to write a feminist novel set across the South-African apartheid’s political atmosphere, Community Engagement Coordinator Rafael Zen interviews Colleen van Niekerk for Massy Books, interrogating why oppressive norms still exist throughout the 21st Century’s political environment – and how literature can (re)establish a place of imagination against oppressive cultural scenarios.

Rafael Zen – Why choosing to set A Conspiracy of Mothers’ story between South Africa’s apartheid in 1972, and the eve of South Africa’s first democratic election in April 1994? How do you think this specific political atmosphere helped you to develop the book’s theme, and characters?

Colleen Van Niekerk – Part of my intent in writing this novel was gaining a better understanding of how apartheid operated and why it was instituted in the way it was — it’s one thing to live within a particular set of norms and another to interrogate why those norms exist.

This period is interesting because “grand” apartheid had been solidified for some time by the start of it and was completely dismantled as a political — but not economic— institution by the end of it. What unfolded during it in microcosm in this story is what unfolded on a far larger scale in South Africa: personal and generational trauma, sanctioned violence and cruelty, and of course, the multi-layered struggle against the institution itself.

I think the period allowed for a fulsome exploration of the many conflicts within and between the characters in the story.

RZ – You come from a country that understood for a long time that intimate relations between the white race and any other race was not only a criminal act, but a betrayal of religious faith and personal values. When you write a story that addresses the painful legacy of an oppressive political system that is so close to your personal history, what do you wish to achieve? What is the connection you are trying to establish with your audience?

CVN – I think the story should stand in its own right, outside of my personal history, as a study of how white supremacist thinking and institutions operate and the cost that is exacted on everyone. The Immorality Act, which is described in this question and explored in the novel, is one of the devastating ways this came into being.

A Conspiracy of Mothers took more than a decade from inception until publication. At the time I began working on it I could not have predicted we would be in the current cultural moment of contending with matters of social justice as we are.

I think it has a particular resonance now for that reason, but ultimately it is up to the reader to determine what they wish to take from this work. My intent in the end was to deliver on the vision I had for it as well as I could; I feel that that’s the responsibility incumbent on writers.

RZ – This is your debut novel – and it was a well-received Amazon First Reads pick in September. How do you feel about releasing A Conspiracy of Mothers to the world? What has the feedback from the readers been? Do you think the feedback helps you understand your writing process better?

CVN – Being my debut, I had no precedent for how this process would unfold but have been heartened by the feedback from readers who have said this story and its characters have stayed with them even though the country and circumstances may be quite different from their own.

Equally satisfying has been hearing from other South Africans, particularly elders, who’ve told me I got it right. One of the goals I set for myself was to convey a South African story for a non-South African audience while remaining true to the country, language, context etc.

I think I have achieved that, but the feedback also tells me that there’s an appetite for African writers, and African stories and perspectives, all of which oftentimes fall outside of the mainstream of the publishing industry. That’s encouraging.

RZ – In your book, the bonds between womanhood, and race seem to be not only an act of equality, but a scream for survival. Also, we seem to be experiencing a time where the strength of identity politics movements allows/invites more titles that address the traumatic legacy of white-supremacist history to be released. What does it mean for you, as a BIPOC author, to be able to amplify the message of this story?

CVN – One of the things that I enjoy most about reading and writing is the freedom to explore. I think the ability to pick up any book and see where it takes you is deeply liberating — and we should remember that many people in many parts of the world don’t have this right. So when I write, I write for the curious, regardless of their background.

I think the amplification of this story has as much to do with my publisher as it does with me — this novel wouldn’t be in the world, in this form, without their engagement.

I do think that a story of this nature being published, and having it be the product of what I found to be a respectful partnership with no questions around my creative control, signifies that, at least in a very small way, publishing is reckoning with the need for stories that sit outside of the conventional mould.

Publishers have to get on board, as do booksellers, if we want to place a broader selection of books in front of readers.

I think that much begins in the imagination; if we cannot imagine it, it becomes hard to visualise and reckon with something, whether that be our understanding of how to contend with the climate crisis, or the wide spectrum of what we class as falling into identity politics (which is in fact very personal, generational in nature, often fraught and both deeply rooted and complex).

What people take from this novel in the area of womanhood or any other related to gender or race is dependent on their own unique circumstances — that freedom to take what you will from the page comes into play again.

In general I think authors are a key propellant in having us explore what is often underrepresented, much as a brilliant book like Interior Chinatown by Charles Yu makes us think anew about anti-Asian racism and the way in which those of Asian heritage are constructed in the popular imagination.

RZ – Could you send us one passage from the book that you think strongly addresses the theme of race, womanhood, and intersectional trauma in Conspiracy? What do you think this particular excerpt/scene reveals from your literary production?

CVN – This is the opening scene of the book. It grounds us in the protagonist’s point of view and state of being, but also conveys the way in which trauma suffered as a result of race and gender has the ability to just sit, and stay, over time, unaddressed. This excerpt conveys whose story this ultimately is, and also what the stakes truly are for her.

Night has no color. It has smell, taste, flickering visuals. It is not a void but a time when the presence of other things pushes forward. Darkness sets upon Yolanda, heavy and tight as a vise. Weary, she knows that she will always face the night alone, no matter who is in the room, who is in her bed.

Yet fear rises in her like bile, for this night brings more with it than shadows.

Come home, the voice said, the one she heard after she closed her eyes and lay down on her bed. It was Ma’s voice again, wafting in on the wind that raised the tattered net curtain of Yolanda’s bedroom like a hand. Two words, drifting in with the scent of fresh rain and wet soil, with the sound of horses neighing in the nearby stables. Rachel, her mother, was beckoning her away from this Virginia hamlet and back to Cape Town’s unforgiving shore, as if an absence of eighteen years was nothing at all.

These two words had come over several weeks now, straining Yolanda’s worn spirit where it felt held together by rusted rivets, pushing at the tight, painful places within her. The call left her in agony. It illuminated the shards of her broken heart that she’d so carefully papered over. An insomniac accustomed to resting in the security of daylight, she was finding herself too disturbed to get much sleep at all.

– Excerpt from A Conspiracy of Mothers by Colleen van Niekerk