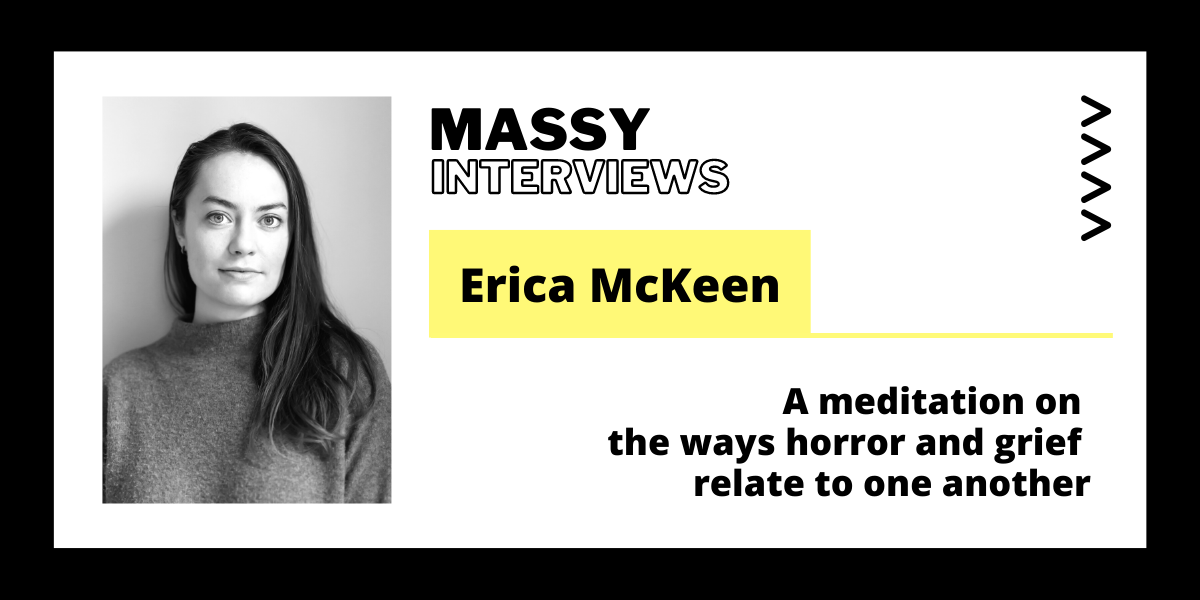 At this in-person event, McKeen will be joined by guest readers Sophie Crocker and Vivian Li for a night to celebrate both poetry and prose, as well as to explore topics of gender identity, memory, and mental illness.

Tear is a reclamation of female rage and a horrifyingly deformed Bildungsroman (a novel focused on the character’s psychological development). Blurring the real and the imagined, this lyric debut novel unflinchingly engages with contemporary feminist issues and explores the detrimental effects of false narratives, gaslighting, and manipulation on young women.

This event is free + open to all of our community, and registration is mandatory. The gallery is wheelchair accessible and a gender-neutral washroom is on-site.

Covid Protocols: For all in-person events, attendees must provide proof of vaccination, wear a mask (N95 masks are encouraged and recommended as they offer the best protection), and consent to having their temperature checked at the front door. We ask that if you are showing any symptoms, that you stay home. Thank you kindly.

You can purchase Tear by Erica McKeen at Massy Books.

To celebrate the launch of Tear, Rafael Zen interviews McKeen for Massy Arts, asking what a reclamation of female rage means, and how this novel addresses relationships, and power dynamics.

Rafael Zen – First of all – why this title? What do you think the word Tear evokes from this novel? And also, who is the reader that will be delighted with your book?

Erica McKeen – Although my preferred pronunciation is “tear” as in “rip” or “split,” the title Tear is intentionally a homograph—a combination of two words that are spelled the same but pronounced differently and with different meanings.

Much of the book is a meditation on the ways in which sensations of horror and grief relate to each other, especially within a person’s physical body. The word “tear” encapsulates so many of the emotions and topics I investigate within the novel: violence, both physical and psychological; anger; fear; loss; rebirth.

Tear is for anyone who has struggled with mental illness, who has been lied to explicitly or implicitly by people close to them, who has had to wrench themselves, out of necessity, into a new identity or state of being—ultimately, Tear is for anyone who has found themselves at their wit’s end and wants to discover or re-discover the power inherent in having nothing left to lose.

RZ – Your book’s synopsis says that Tear is a reclamation of female rage. Without telling us too much, what is rage for in France’s story? Was rage a conscious theme? And finally, what does it mean to you for someone to express “female rage”?

EM – Rage was definitely a conscious theme that I considered while writing Tear. I once had a therapist tell me that depression can sometimes be anger turned inward, and that explanation stuck with me and eventually led to the formation of Frances’ character.

Frances has a large amount of pent-up anger as a result of certain childhood experiences (I have to be vague here or I would give too much away!) that she has a difficult time recognizing as traumatic because they aren’t overtly so.

I would also describe Frances’ rage as specifically female because she’s been trained by culture and society to suppress it. This is an experience that I think many, if not all, women can relate to—the either inferred or outright stated societal prescription that we should be quiet, reserved, and indirect. That we shouldn’t be loud or confrontational or make a fuss.

To express female rage, then, is twofold: it’s allowing ourselves to feel the frustration that comes from normal, human experiences as well as releasing the anger that comes from being cornered into a role of passivity for most of our lives.

RZ – The synopsis also goes: “Frances is quiet and reclusive. Isolated in the basement, and on the brink of graduating from university, Frances herself starts to question the realities of her own existence.”. Why choosing a female character that is graduating from university? Are there relationships and power dynamics in this kind of environment that you wanted to highlight – or felt that it was needed to write this novel?

EM – I chose a character about to graduate from university because this aspect of her identity suggests that she’s about to enter the workforce, the realm of what so many colloquially call “the real.”

If you’ve ever been a university student—or even in high school, for that matter—you’ve heard it before: “Once you enter the real world, you’ll understand…” It’s this strange idea that, while a person is young or in school, their experiences and emotions aren’t quite valid or genuine.

In a sense, because Frances is on the brink of leaving university, she’s in a moment of transition between the so-called “not-real” and the “real”—she’s balancing between these two realms.

And as a narrative conductor, Frances intensifies the core instability of this between-space, becoming increasingly uncertain of what is dream, memory, or present-day reality.

RZ – Your book blurs reality and the imagination, addressing contemporary feminist issues and exploring the detrimental effects of false narratives, gaslighting, and manipulation on young women. How was the research process of this book? Whose voices are compiled on France’s voice? What contemporary feminist issues were you trying to discuss? Do you feel like you write through a feminist perspective? If so, why?

EM – A lot of the research that went into Tear was to investigate and immerse myself in gothic female characters (or potentially female-coded characters, as in the case of Frankenstein’s creature) who are wrapped up in their own psyches and either losing or discovering themselves—or both.

The governess from Henry James’ The Turn of the Screw, Eleanor from Shirley Jackson’s The Haunting of Hill House, and Eli from John Ajvide Lindqvist’s Let the Right One In, among others, all played a role in building Frances’ character and her perspective.

I wanted to investigate how a woman reclaims her narrative without (and perhaps paradoxically, because this is her narrative) losing herself in the mix. I think it’s easy to become volatile, almost volcanic, in the heat of reclamation.

This isn’t to say that anyone’s rage after a traumatic experience is unjustified, it’s just to say that we should manage the monstrous within ourselves as we navigate our histories and begin to heal.

RZ – If you could choose one passage from your book – one that represents the core theme/style of Tear, what would this passage be? Can you share it with our readers? Why did you choose this one?

EM – This passage is from Frances’ mother’s backstory, a section of the novel that explains how she became pregnant with Frances. I love this passage because it suggests that, even before Frances was born, her reality was occasionally up for debate or interpretation—that the feeling of unreality that she carries with her into adulthood could be a kind of epigenetics that began when her mother first conceived (of) her, both in a physical and psychological sense.

I also think this passage is a good representation of the novel because it highlights the stories we tell ourselves in moments of strife and shame—sometimes to a point where we no longer recognize them as stories—in order to keep ourselves moving forward, to keep ourselves sane.

“By the end of April, when [Jeanette] finished exams, she was almost four months pregnant. Her body was heavier, her stomach beginning to stretch, her limbs and feet thicker, her mind thicker with the weight of it all, far enough along that the pregnancy—the baby—was real, that it was all really happening. And yet not so far that anyone noticed if she wore loose sweatshirts, if she complained about not getting enough exercise, about the weight she had put on since high school.

She told her friends and professors that her parents weren’t doing so well with their money, their health, that she might not be back in the fall, that she was needed in London, had unavoidable obligations. She repeated these excuses, fabricated reasons for her eventual disappearance until no one asked after her or expected her, until they hardly saw her, until she was already gone in their minds, invisible in the hallways. Until even she believed for moments at a time—bright, floating moments, fleeting moments—that her parents actually were sick or out of money, or both, and that she was going home to care for them.

She woke many mornings from dreams—dreams in which her stomach was flat and all her excess fat had vanished, in which every movement was light and easy, and her pregnancy had disappeared—in the same way she had as a child, the nightmares drained from behind her eyes when her mother pulled open the curtains. Waking now to similar sunlight, her dreams only dreams but still vivid, her stomach firm and growing, her eyes sometimes tearful, sometimes dry and frozen. Waking and hearing Momma, and not knowing if it was her calling for her mother to open the curtains and chase the nightmare away, or if it was her own child calling from inside, calling to be acknowledged, recognized as palpable, persistent. Real.”