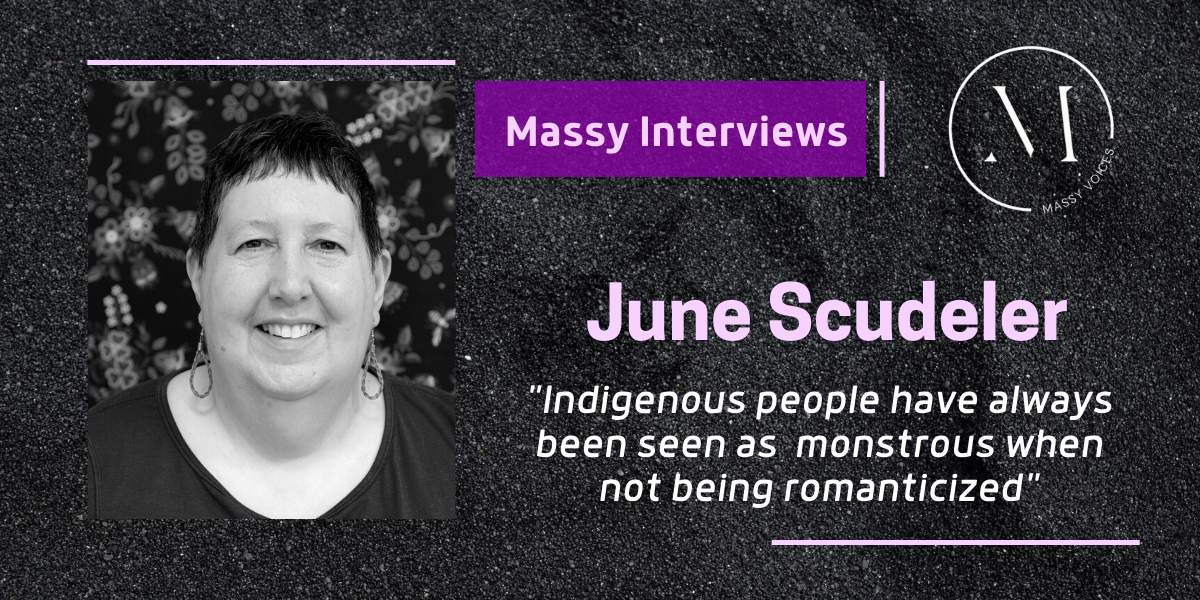 On Tuesday, September 13 at 6pm, join Massy Arts, Massy Books, and Dr. June Scudeler for “We Are The Best Survivors”, an in-person conversation on Indigenous Horror in literature, film, and art.

At the event, Scudeler and attendees will explore some common horror tropes (the Final Girl, the Indian Burial Ground, and the wendigo) to appreciate how Indigenous artists are making the genre their own.

Donations from this event will go to the 2-Spirit Collective, an organization that provides support, resources, and programming for Indigenous youth, ages 15 to 30, who identify as 2-spirit or LGBTQ+ (lesbian, gay, bisexual, transgender, queer, gender non-conforming, along with many other identities), and for those who are questioning their sexual or gender identities.

To celebrate this event, Rafael Zen interviews Scudeler for Massy Arts, addressing the importance of breaking stereotypes about Indigenous peoples and arts, and asking what Indigenous horror tells about the contemporary world.

Rafael Zen – Your talk for Massy Arts is going to present ideas about Indigenous horror. What do you think this particular genre offers regarding story content, that other forms of horror narrative don’t? When you think of the works that you are analyzing, what are the characteristics of Indigenous horror?

June Scudeler – Indigenous people have always been seen as the “Other” and as monstrous when not being romanticized. Writers like Stephen King, particularly in his novel Pet Semetary, and in films like Amityville Horror (1977) use the Indian Burial Ground trope, the fear that the middle-class suburban home is haunted by Indigenous genocide.

Instead, Indigenous horror uses the genre to sneak in social justice issues. For example, Blackfeet author Stephen Graham Jones’ 2020 novel The Only Good Indians is not only about Elk Head Woman wreaking revenge on five Blackfeet men who killed her when she was pregnant but also explores identity and the importance living in a good way.

The Guatemalan film La Llorona (not to be confused with the horrible The Curse of Llorona) deliberately uses the popularity of horror films and a vengeful spirit to expose early 1980s genocide of Mayan people to a country that would forget.

RZ – You are currently delving into stories about the Métis rougarou, a creature who is a mixture of French werewolf or loup garou, and Cree and Anishinaabe shapeshifters. Why did this creature inspire you to research? What is the most interesting/fascinating part of rougarou stories? Do you think studying Indigenous horror helped you connect even more with your Métis community? If so, why?

JS – I’ve always loved Hallowe’en and the macabre, so I was excited to hear about the rougarou. My Métis ancestors are from Red River, Manitoba and Batoche, Saskatchewan, but I was born and lived my entire in so-called BC, so it is a good way to connect to community.

The rougarou is a teaching; for example, in Cherie Dimaline’s novel Empire of Wild the rougarou is used to ensure men respect women and to make sure people don’t kill more than they need when they hunt.

RZ – Science fiction and horror are often described as genres that address political issues in literature. When this lens is applied to Indigenous horror, what do you think these stories tell about the contemporary world?

JS – Science fiction and horror still tend to be very white but there are many more BIPOC writers and filmmakers. Jordan Peele’s 2017 film Get Out was an important moment because it broke the common trope of the Black character being killed before the end of the movie as well as skewering white liberalism.

The film’s success also showed a hunger for films that told stories that aren’t usually heard as in Blood Quantum or Night Raiders, both big-budget Indigenous science fiction and horror films.

RZ – What are you excited about sharing with the attendees of this event? What may attendees expect from this talk?

Attendees will get to sample some Indigenous horror texts and films to understand why horror is such an exciting genre because it lures people in and exposes them to social justice issues like colonization, blood quantum or the continuation of Indigenous ways of knowing.

RZ – If someone is interested in knowing more about Indigenous horror, what films, books, artworks, or series would be a good starting point? Could you recommend a few authors/artists?

JS – The novels The Only Good Indians and Mongrels by Stephen Graham Jones, Monkey Beach by Eden Robinson (Haisla/Heiltsuk), and films Blood Quantum by Jeff Barnaby (Mi’kmaq) and Slash/Back by Nyla Innuksuk (Inuit).