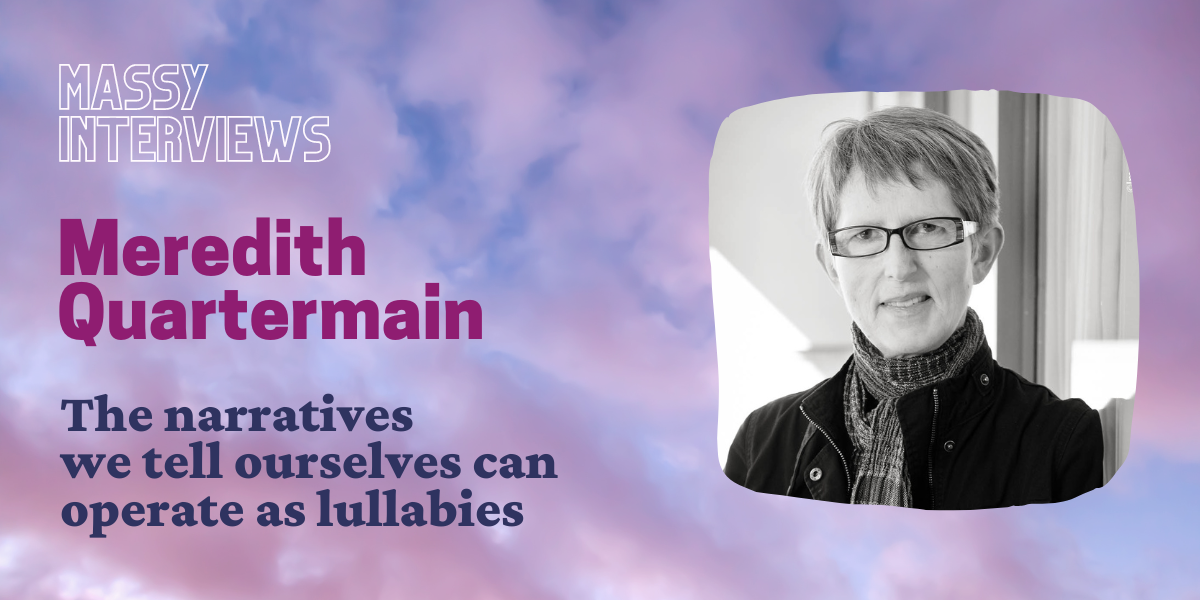 On Thursday, August 18 at 6pm, join Massy Arts, Massy Books, and Vancouver-based poet and novelist Meredith Quartermain for the launch of her new book “Lullabies in the Real World” (2020), a finalist for the 2021 Robert Kroetsch Award for Poetry.

At this in-person event dedicated to poetry, Quartermain will be joined by poet Carol Harvey Steski to read passages from the authors latest books: “Lullabies in the Real World” and “rump + flank”. After the readings, author will engage in an intimate conversation about how language, rhythm, and literature can investigate the place of a colonial nation in history, and the place of a poet vis-à-vis the voices of other poets.

This event is free + open to all of our community, and registration is mandatory.

Covid Protocols: For all in-person events, attendees must provide proof of vaccination, and use of mask at all times when at the gallery. We ask that if you are showing any symptoms, that you stay home. Thank you kindly.

Please make sure to register for the event.

You can purchase Lullabies in the Real World by Meredith Quartermain at Massy Books.

You can purchase rump + flank by Carol Harvey Steski at Massy Books.

To celebrate the book launch, Rafael Zen interviews Quartermain for Massy Arts, investigating the author’s attention to history in these poems, and asking how poetry can imagine a time before or outside colonization.

Meredith Quartermain / The narratives we tell ourselves can operate as lullabies

Rafael Zen – First of all, I would like to start by investigating the reasons behind this title. Why choosing “Lullabies in the Real World”? What do you think it encapsulates from the book and your poetry?

Meredith Quartermain – “Lullabies in the real world” is a phrase from a poem by bpNichol. He wrote that phrase when he was taking the same train journey from west to east coast that I was on when I collected notes for my book.

Some of the poems in the book are addressed to bp, and then, more generally I felt the phrase captures the idea that the narratives we tell ourselves can actually operate as lullabies or things that put us to sleep and lure us into incomplete pictures of what’s in front of us.

RZ – Your book was long-listed for the 2021 Raymond Souster Award, and was a finalist for the Robert Kroetsch Award for Poetry at the 2021 Alberta Book Publishing Awards. Why do you think fellow authors and editors from the literary world enjoyed this book? And in this sense, what do you like the most about the poetry you write? What should readers expect from this new poetry collection?

MQ – Readers tell me they like the experience of rhythm in my poems. Some of them consciously evoke train sounds, but these poems also appeal to rhythm through their quotation and morphing of well-known lines from canonical works and nursery rhymes.

Exploring the history of places and questioning the labels stamped on them have been threads in my poems since Vancouver Walking.

RZ – The synopsis of your book says that these poems establish a conversation with authors such as bpNichol and Robin Blaser. Why these conversations? Is there something in these authors’ literature that you wanted to evoke within your collection?

MQ – Like any writer, I find myself speaking in a conversation among writers who came before me. Robin Blaser was a close friend, and I’m haunted by his sense of the Real as a set of relations beyond our ability to wholly grasp.

He made me see our certainties as rather temporary dreams – speech itself the ultimate dream. These ideas come up, for example, in “Night-climb” where I refer to Robin as the “Holy Forester” (after the title of his life-long serial poem).

In my poem I ask him how to navigate what I call the “wildergrid,” and I quote a phrase from him describing Canada as a “realm of the dead” certitudes: Nation, Progress, Production.

RZ – Why do you think this book challenges colonizing literatures such as the Odyssey and various canonical British and US voices? By doing so, are you in the pursue of a decolonizing literature? What is poetry’s potency to address and discuss social and political issues?

MQ – I was “colonized” by the British literature imposed on me in the standard Canadian school system. The required reading described landscapes never seen in the BC woods where I lived, and behind it was a foreign world of kings and queens. Yet my urge to write was shaped by that colonization.

As I worked out the poems in Lullabies, lines from Shakespeare, Coleridge, Yeats, Tennyson and others would come back to me, and often I would keep the rhythm of those lines and something sort of half-rhyming with the original, but morph the phrase into something new.

I adopted a persona named Odyssea to counter the patriarchal narrative of heroism found in the Odyssey for example. So in a sense I’m trying to decolonize myself in these resistant acts. I think poetry can be quite a powerful way to challenge narratives that have outlived their usefulness, or become downright oppressive.

And one of the ways it does this is by highlighting and undoing common phrases and buzzwords in those narratives.

RZ – Starting with a train journey from the West Coast to the East Coast, your book ends by imagining a time before or outside colonization. How and why do you imagine these times? By doing so, do you think you were able to also reimagine the way you live on these lands?

MQ – In the final poem, the poet stands on the shore of Cape Breton Island and utters a series of wishes for connection with the land in a time before European explorers, a time before the Christian cultural era, and a time before relentless profiteering and consumerism.

The poem even imagines earth in deep geological history before the last great extinction event. It utters a prayer for all that’s been trampled and forgotten by colonizing forces, and then reflects on the poet as in some way like the extinct flightless bird, the dodo.

The poet writes from a position of clumsiness (a white descendent of colonizers), and with a sense of her own impending extinction. Yet she sings out to future beings to remember history, and be prayerful for all those who were lost.