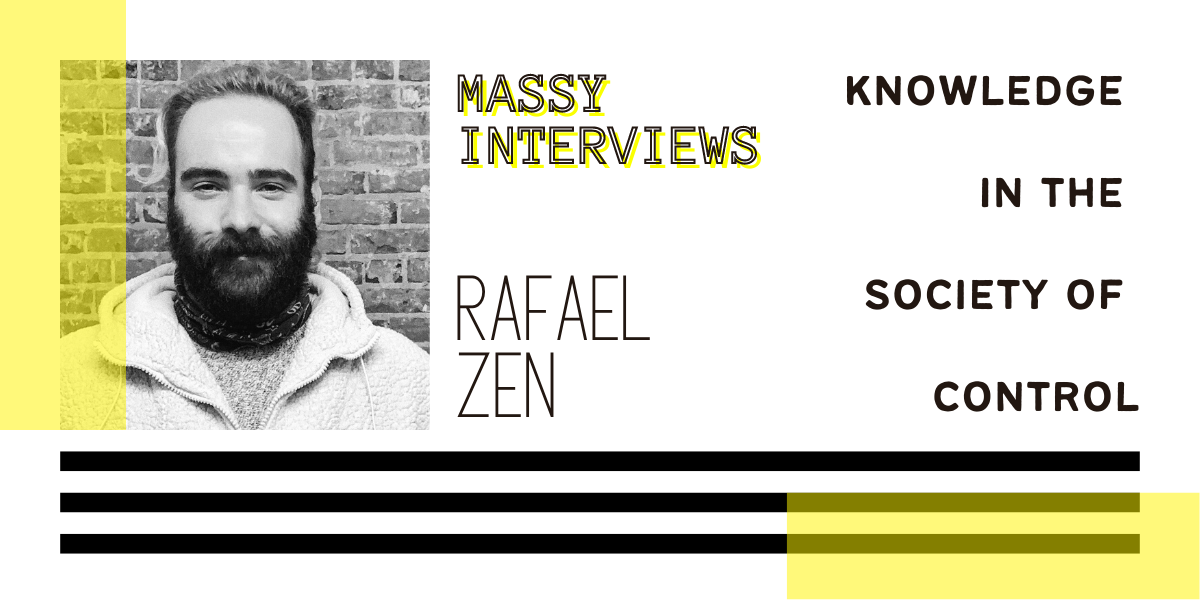 The show will present the web series Ideas To Make The World Bearable, a political education project that Zen organizes and coordinates in South America, and will invite Zen and Alomar to create installations as a takeover of Massy Arts’ windows.

To celebrate the upcoming show, Massy Arts interviews Rafael Zen, addressing knowledge as privilege in a society of control, and what is the use of philosophical and political education when dealing with the social and political issues of the 21st Century.

Rafael Zen / Knowledge in the society of control

Massy Arts – The upcoming show will present to Canadian audiences the web series Ideas To Make The World Bearable (12 episodes) – a political education course that you organize and coordinate in South America researching anti-oppression and anti-capitalist theory through the fields of sociology, philosophy and cultural studies. Can you tell us more about the project – and why viewers/readers should watch it?

Rafael Zen – Ideas to Make the World Bearable is, indeed, a political and educational project that I organize in Brazil. Basically, it was a virtual space held in 2021 where me and other curious minds could openly research and debate decolonial theories from different regions of the globe.

When the pandemic hit in 2020, more and more people started to feel weird about all the oppressive systems that shape contemporary reality and that clearly did not stop middle through a global crisis: the economy could not stop because the state could not stop, work had to still be a priority – our bodies were tirelessly instigated instead of taken care of. Because of that, it felt right to gather friends and ask them to help me create a mosaic of speeches that could point out political issues (sometimes solutions) for problems of the 21st century.

Art and education are two fields that I believe amalgamate very well, so I wanted to collectively create this space where theory could be translated into accessible talks. Most of the time, theoretical knowledge can become too much to handle because colonial-capitalist systems have created a web of absences in our social mind, a gap that was instigated throughout our ethical, political, and communitary education.

We simply were not raised to become smarter than the oppressive system that has built us, and anarchic knowledge requires complexity because the notion of “escaping the system” is nuanced, it requires us – the people – to gather information that is not easy to access as populations who were conditioned/distracted by mass media.

In this context, decolonial knowledge is one of the higher privileges in a society of control, and I believe folks that have been educated by our academia should work on using their intellectual tools to build healthier communities.

Initially, we were supposed to meet for eight weeks – but that became eleven. We were very interested in correlating social and political theories under four main themes: “Social Nature: culture as a virus and the shock of global hegemony”, “We Will Only Accept Radical Equality: identity and the fetish for identification”, “Sovereign Power: we have never left the surveillance age”, and “Nomad Thinking & Political Emancipation: national education as captivity for the people”.

As you can see, we were trying to attack and defend ourselves from all of the most paranoid monoliths that have built contemporary societies: the state, the church, blood families, the school, the police and the fear industry, the hospitals sustained by white medicine and white science, beauty industries and aesthetic formation, markets of desire, markets of identity. We wanted to address all of these issues, but having philosophical and political theory as the primary base of work.

In this sense, the books, articles, and lectures that were brought to this project formed a panoramic view of what anarchic/leftist thinkers from all over the world (and in different time frames) were discussing about the concept of freedom – from hierarchical systems in post-colonial-industrial-capitalist societies, from the identities that capitalism has suggested and validated, from language itself.

The first thing we understood was: language is a virus. Then, all we had to do was to name and analyze all the linguistic viruses that had shaped and conditioned our existence as bodily creatures in a cultural world – a world that has turned itself oppressive against its people, we, the masses.

Why should viewers watch the show, or come to the exhibition? Because being provoked is the best way to learn. Education, when conscious of how harmful power-seeking has been over the last decades, can be an invitation to misbehave. In this context, as well, art is an invitation to misbehave. And this relates greatly with Canada, which – in my opinion – is an example of a society of control and behavior.

MA – The show’s synopsis affirms that – by trying to reach a point where ideas can become as delirious as art itself, Ideas to Make the World Bearable accepts the discontinuity of communication and information in post-global societies, creating a web of speeches that suggest more than admit, question more than give answers, and provoke thinking so it does not rest still. Do you think you create activist art?

RZ – That is a tricky question because of the term activism and the multiple forms that activism can take. Is it a vigorous effort into changing society and politics? Is it a practice of action in times where our bodies are conditioned to be numb? Is it the desire to reform the status quo? If so, I believe I have the wish to create activist artworks and classes, for sure.

How could I not? As a body that has been brought up by the cultural devices that sustain colonial-capitalism, I don’t understand how folks can just stand still and rest in peace in front of shiny machines. To me, there is a tackiness about how colonial-capitalist systems operate that is too much to handle quietly.

You see. Mostly all linguistic mechanisms that build the contemporary “average citizen” have been corrupted by the seek of power – whether economic, symbolic, or cultural. I think that is frankly pathetic and boring – and what we have normalized as a global society is haunting to me. The world as we know was built upon a system that only suggests control, pain, and an everlasting confession of a self, whoever that self may be.

We are conditioned to live in a world where multiple populations are being forced into “paid labor” only to sustain an uneven structure that allows wealthy populations to perform superfluity while most of the working population is struggling monthly with paying rent on land that has been stolen in the first place. This all sounds abusive, yet we have normalized abuse as a form of life.

As Brazilian theorist Suely Rolnik would suggest, there are multiple forces used by colonial-capitalism to sequester life’s force of creation. Without it, it is impossible to dream of new utopias and to germinate new worlds. At the end of the day, I think I create because language and history are constructs that can be retold in more inventive ways.

If activist art is the one that wishes to bring back life’s potency of questioning and transformation, for sure what I want to pursue is a life of layered activisms.

RZ – These art forms are based on very accessible materials – and I think they represent a counterattack when it comes to artistic methods. They invite us to rethink what counts as art materials and what we can do with the multiple images and products that capitalist societies place upon our lives.

Collage, as a method, allows us to readdress the images that are thrown our way by all the institutions that compose mass media. The same thing with assemblage and any sculpture that uses non-conventional materials – they mock the art system itself by imposing value onto things that once were considered daily garbage.

By suggesting other ways to see and engage with mediatic images, they become inherently close to the idea of the show – to promote a more critical and present vision of communications, mass manipulation, and the commoditization of the images that are forced our way by the screens of the capital.

MA – Could you point out one episode or fragment that you think encapsulates this exhibition’s spirit? Why this one?

RZ – The episodes evolved progressively – I was studying how to edit a show while doing it, but there is something about Episode 4, when we talk about Daniela Arbex’s study on the Brazilian Holocaust, that still strikes me.

As researchers, we were questioning acts of violence that become normalized in different epochs. By addressing what happened in Brazil at the Cologne Mental Hospital, where more than 60,000 patients died (most of starvation or cold), Arbex is able to show how we – as a society – are easily convinced to normalize violence upon chosen targeted bodies.

To present South-American authors to new audiences is also something that excites me, as this focus may allow readers to add other philosophies and geographies into the decolonial map that we are still trying to understand.

There is this idea by anarcho-feminist teacher Maria Lacerda de Moura (Brazil, 1887-1945) that suggests the possibility of libraries dying, and with them the possibility of connection with voices from the past, ghosts throughout those shelves. This course was an attempt to pay attention to voices that were forced outside of the intellectual white circles.

Although, in the series, theory also becomes experimental, the show can be a path to get to know multiple overlaid ideas that may help with understanding more about anti-capitalism, anarchic thinking, and anti-state thinking.

In this episode I mentioned, I was able to play around with a very simple technique of video-collage, which is something that interests me.

When the show allows itself to fail, to be truly experimental – outside of any market demands, I believe the visuals reach what we were trying to do mentally during the classes: to challenge the status-quo we all carry within, to play around with language, and to combine different inputs together in some sort of mosaic of the 21st century.