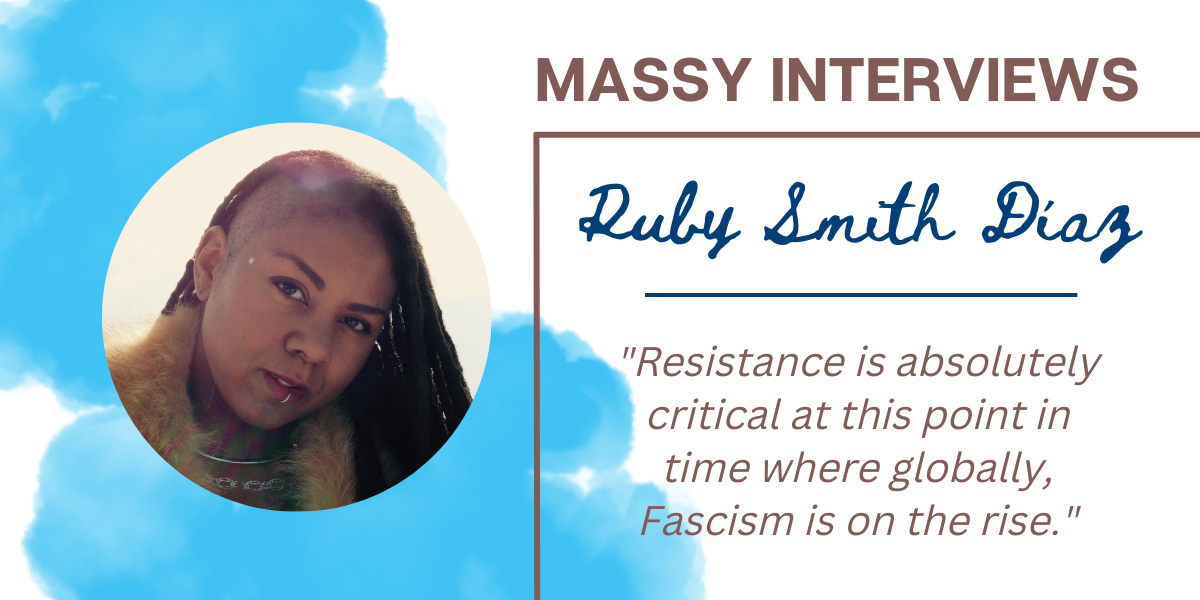 The Massy Arts Gallery is located at 23 East Pender Street in Chinatown, Vancouver.
The gallery is open Tuesday to Sunday, 12pm to 5pm.
Entrance is free, and masks are mandatory.

To celebrate Oricha Del Norte, Rafael Zen interviews Díaz for Massy Arts, investigating how the images in the show contest traditions under the watchful gaze of slavemasters and missionaries towards the questioning of white supremacy.

Ruby Smith Díaz / Resistance is absolutely critical at this point in time where globally, Fascism is on the rise

Rafael Zen – Oricha Del Norte, your new window exhibition for Massy Arts, questions how displacement and enslavement change the ways in which African diaspora peoples honour their spirituality. Are you specifically talking about the relationship between Africa and North America? How do you think this feeling of displacement affects contact with one’s spirituality? In this sense, what is spirituality through the lens of your work?

Ruby Smith Díaz – Through the kidnapping of my ancestors, there was an interruption of every single aspect of existence. Spirituality and traditions are included in this. This ‘interruption’, was not unique to folks forcibly brought to North America, but rather in every single instance where someone was forcibly removed from their home, and transported to a new setting.

For me, I had to face the reality that I will likely never know where exactly my African lineage comes from. I know the place that they were brought to, but the history connecting me to their ‘home’ has intentionally been erased and hidden.

In that sense, my spirituality comes through learning about ways in which communities honoured the lands and the ancestors of the lands they were brought to throughout the diaspora, and so my work acknowledges this interruption, and this displacement, and invites a new imagining and new traditions-just like so many of my ancestors did.

RZ – This exhibition references African religions in Brasil – and it just feels appropriate for the many faces of South America’s political crisis. Why choosing Orichas and their use in African-Brasilian religions? How do you think Orichas relate to Vancouver and Chinatown?

RSD – Growing up in amiskwaciy- treaty 6, I never had access to any kind of teacher or community where I saw myself reflected, so I had to search out ways in which I could connect in some way to diaspora traditions.

Being of Chilean and Jamaican ancestry, I felt the need to search out traditions that came from places where both sides of my ancestry co-existed and formed their own traditions within mixed context. That journey started with learning Capoeira, then Afro Brasilian Dance, and then Afro Cuban dance. In learning these dances and practices, I was struck by how Blackness was so highly esteemed across the diaspora- and particularly in learning about the ways in which Orixas use mirrors to admire their own beauty, one with the elements.

RZ – How do you think the photographs in Orichas del Norte contest traditions under the watchful gaze of slavemasters and missionaries? Do you think these images provoke the viewer into questioning white supremacy? If so, how?

RSD – To be honest, I was not inspired to take these photos for anyone really other than for myself at the time. And that I think in it of itself is freedom. My imagining was based in Afro-Futurism, and the vehicle of Afro-Futurism helped me reconnect to the past, and feel a sense of connection to where I was. For folks questioning their own white supremacy, they may feel all sorts of feelings about it, but I’m not really interested in unpacking it.

RZ – You say your show is an act of resistance. Do you think we live a moment in time when resistance is important? If so, why would an artist use their media/platform to question power and politics? Do you consider yourself an artivist?

RSD – Resistance is absolutely critical at this point in time where globally, Fascism is on the rise. For me, I would like to live by the words of Chilean folk singer Victor Jara:

That love for humankind, that love for the land is what I choose to let move me in every aspect of my existence. It cannot be bought, or sold. It is a responsibility that every single human being has.

I don’t consider myself to be an activist or an artivist. I just let myself be moved be the struggle in solidarity with so many others that believe a better world is possible.