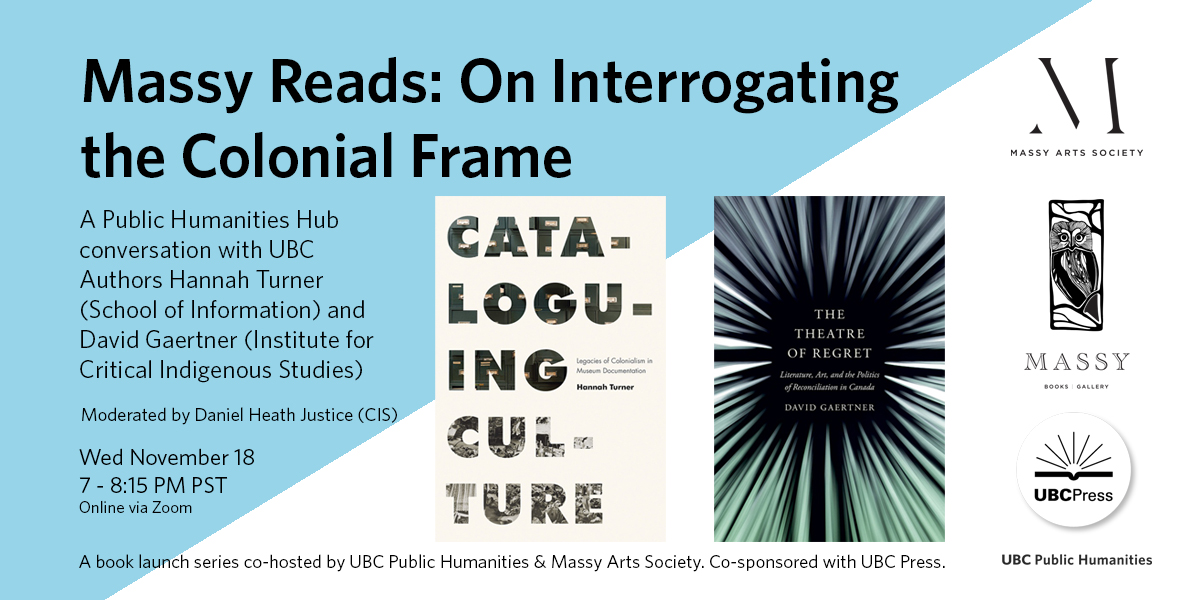 Books can be purchased through Massy Books.
To purchase a copy of Cataloguing Culture: Legacies of Colonialism in Museum Documentation by Hannah Turner, click here.
To purchase a copy of The Theatre of Regret: Literature, Art, and the Politics of Reconciliation in Canada by David Gaertner, click here.
This event is free and open to the public.
Moderated by Daniel Heath Justice, Professor, Institute for Critical Indigenous Studies
Wednesday, November 18, 2020
7:00 – 8:15 pm Pacific Time
Online via Zoom
Registration mandatory. Click here to register.
About the Books
Cataloguing Culture: Legacies of Colonialism in Museum Documentation
By Hannah Turner
How does material culture become data? Why does this matter, and for whom? As the cultures of Indigenous peoples in North America were mined for scientific knowledge, years of organizing, classifying, and cataloguing hardened into accepted categories, naming conventions, and tribal affiliations – much of it wrong. Cataloguing Culture examines how colonialism operates in museum bureaucracies. Using the Smithsonian’s National Museum of Natural History as her reference, Hannah Turner organizes her study by the technologies framing museum work over 200 years: field records, the ledger, the card catalogue, the punch card, and eventually the database. She examines how categories were applied to ethnographic material culture and became routine throughout federal collecting institutions. As Indigenous communities encounter the documentary traces of imperialism while attempting to reclaim what is theirs, this timely work shines a light on access to and return of cultural heritage. Museum practitioners, historians, anthropologists, and media scholars will find the practices and assumptions of their fields revealed in this indispensable work.
The Theatre of Regret: Literature, Art, and the Politics of Reconciliation in Canada
By David Gaertner
The Canadian public largely understands reconciliation as the harmonization of Indigenous–settler relations for the benefit of the nation. But is this really happening? Reconciliation politics, as developed in South America and South Africa, work counter to retributive justice. The Theatre of Regret asks whether – within the contexts of settler colonialism – the approach to reconciliation will ultimately favour the state over the needs and requirements of Indigenous peoples.
Interweaving literature, art, and other creative media throughout his analysis, David Gaertner questions the state-centred frameworks of reconciliation by exploring the critical roles that Indigenous and allied authors play in defining, challenging, and refusing settler regret. In 2007, Canada became the first liberal democracy to formally implement a Truth and Reconciliation Commission (TRC) process, a prominent element of global intrastate politics in the 1990s. Through close examination of core concepts in reconciliation theory – acknowledgement, apology, redress, and forgiveness – Gaertner unpacks reconciliation within the contexts of Canadian settler colonialism and the international history of the TRC. In so doing, he exposes the deeply embedded colonial ideologies that often define reconciliation in settler colonial states. The Theatre of Regret redirects current debates about reconciliation and provides a roadmap for the deconstruction of state-centred discourses of regret. Scholars and students of Indigenous studies, cultural studies, Canadian studies, literature, law, and political science will find this book challenging and necessary, as will thoughtful Canadian readers.
About the SpeakersHannah Turner is an information and museum studies scholar, and is an Assistant Professor in the School of Information at the University of British Columbia. She has published in journals such as 𝘔𝘶𝘴𝘦𝘶𝘮 𝘈𝘯𝘵𝘩𝘳𝘰𝘱𝘰𝘭𝘰𝘨𝘺, 𝘒𝘯𝘰𝘸𝘭𝘦𝘥𝘨𝘦 𝘖𝘳𝘨𝘢𝘯𝘪𝘻𝘢𝘵𝘪𝘰𝘯, and 𝘊𝘢𝘵𝘢𝘭𝘰𝘨𝘪𝘯𝘨 𝘢𝘯𝘥 𝘊𝘭𝘢𝘴𝘴𝘪𝘧𝘪𝘤𝘢𝘵𝘪𝘰𝘯 𝘘𝘶𝘢𝘳𝘵𝘦𝘳𝘭𝘺. From 2018 to 2019, she was a lecturer in Museum Studies at the University of Leicester.
David Gaertner is an Assistant Professor in the Institute of Critical Indigenous Studies at the University of British Columbia. His articles have appeared in Canadian Literature, American Indian Cultural Research Journal, and Bioethical Inquiry, among other publications. He is the editor of  Sôhkêyihta: The Poetry of Sky Dance Louise Bernice Halfe and Read, Listen, Tell: Indigenous Stories from Turtle Island (with Sophie McCall, Deanna Reder, and Gabrielle L’Hirondelle Hill).
Daniel Heath Justice is a Colorado-born Canadian citizen of the Cherokee Nation/ ᏣᎳᎩᎯ ᎠᏰᎵ. He holds the Canada Research Chair in Indigenous Literature and Expressive Culture at UBC on unceded Musqueam territory. His most recent book is Why Indigenous Literatures Matter, a literary manifesto about the way Indigenous writing works in the world. He is the author of Our Fire Survives the Storm: A Cherokee Literary History and numerous essays and reviews in the field of Indigenous literary studies, and he is co-editor of a number of critical and creative anthologies and journals, including the award-winning The Oxford Handbook of Indigenous American Literature (with James H. Cox) and Sovereign Erotics: A Collection of Two-Spirit Literature (with Qwo-Li Driskill, Deborah Miranda, and Lisa Tatonetti)