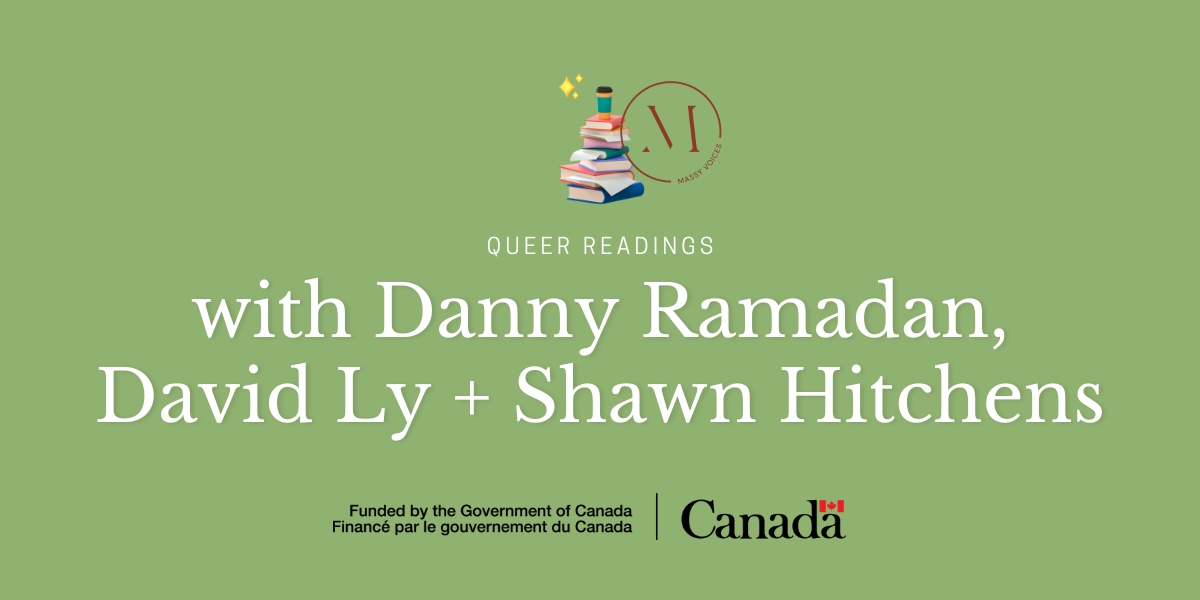 From diasporic love to grievous truths of queer identity–intangible and ever-evolving–this intimate collection of stories invites folks to celebrate the fun, fierce and fluid in togetherness.

Registration is free, open to all and mandatory for entrance.
Purchase at Massy Books:
The Foghorn Echoes by Danny Ramadan
Dream of Me as Water by David Ly
The Light Streamed Beneath It: a Memoir of Grief and Celebration by Shawn Hitchens

Registration is free, open to all and required for entrance. The gallery is wheelchair accessible and a gender-neutral washroom is on-site. Please view our Accessibility page for parking, seating, venue measurements and floor plan, and how to request ASL interpretation.

Covid Protocols: Masks keep our community safe and are mandatory (N95 masks are recommended as they offer the best protection). We ask if you are showing symptoms, that you stay home. Thank you kindly.

Danny Ramadan (He/Him) is a Syrian-Canadian author, public speaker and adovate for LGBTQ+ refugees. His debut novel, The Clothesline Swing, was shortlisted for the Lambda Literary Award, longlisted for Canada Reads, and named a Best Book of the Year by the Globe and Mail and Toronto Star. His children book, Salma the Syrian Chef, won the Nautilus Book Award, The Middle East Book Award, and named a Best Book by both Kirkus and School Library Journal. Ramadan’s forthcoming novel, The Foghorn Echoes (2022), and his memoir, Crooked Teeth (2024), to be released by Penguin Random House. Through his fundraising efforts, Ramadan raised over $250,000 for Syrian LGBTQ+ identifying refugees. He has an MFA in Creative Writing from UBC and currently lives in Vancouver with his husband.

David Ly is the author of Mythical Man (2020), which was shortlisted for the 2021 ReLit Poetry Award, and Dream of Me as Water (2022), both published under the Anstruther Books imprint of Palimpsest Press. He is also co-editor (with Daniel Zomparelli) of Queer Little Nightmares: An Anthology of Monstrous Fiction and Poetry (Arsenal Pulp Press, 2022). David’s poems have appeared in publications such as Arc Poetry Magazine, Best Canadian Poetry, PRISM International, and The Puritan, where he won the inaugural Austin Clarke Prize in Literary Excellence. David is the Poetry Editor at This Magazine.

Shawn Hitchins is the author of The Light Streamed Beneath It (ECW ’21) and A Brief History of Oversharing (ECW ’17). His one-man show Ginger Nation toured extensively before being filmed in concert. Hitchins is an award-winning entertainer, writer, personality, and creator of live performance. Based in Toronto, Ontario, he splits himself between Eastern and Pacific time zones.

The Foghorn Echoes by Danny Ramadan is a deeply moving novel about a forbidden love between two boys in war-torn Syria and the fallout that ripples through their adult lives. A blooming romance leads to a tragic accident when Hussam’s father catches him acting on his feelings for his best friend, Wassim. In an instant, the course of their lives is changed forever. Ten years later, Hussam and Wassim are still struggling to find peace and belonging. Sponsored as a refugee by a controlling older man, Hussam is living an openly gay life in Vancouver, where he attempts to quiet his demons with sex, drugs, and alcohol. Wassim is living on the streets of Damascus, having abandoned a wife and child and a charade he could not keep up. Taking shelter in a deserted villa, he unearths the previous owner’s buried secrets while reckoning with his own. The past continues to reverberate through the present as Hussam and Wassim come face to face with heartache, history, drag queens, border guards, and ghosts both literal and figurative.

Dream of Me as Water by David Ly explores ways of being that are not beholden to the expectations of others. Moving beyond the themes of race, identity, and personhood navigated in Mythical Man, Ly uses water as his central metaphor, meditating on how identity is never a stagnant concept, but instead something that is intangible, fluid, and ever-evolving. Dream of Me as Water revels in the nuances of the self, flouting outside perceptions for deeper, more personal realities.

The Light Streamed Beneath It: a Memoir of Grief and Celebration is Shawn Hitchens’ sophomore work of non-fiction published by ECW in October 2021. The Light was published in three formats –– trade paperback, ebook, and audiobook.