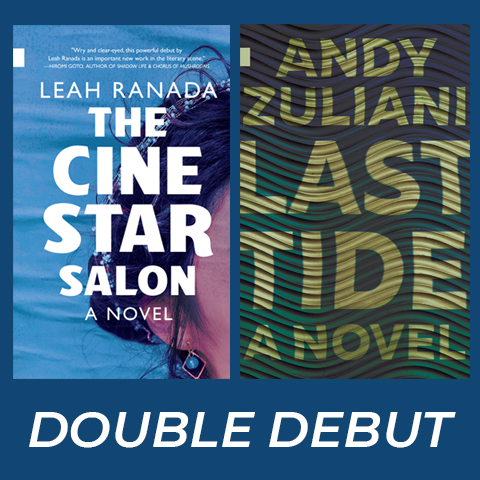 On October 19th (Tuesday), at 7pm, join NeWest Press and Massy Books for the launch of two debut novels!

Celebrate Leah Ranada’s “The Cine Star Salon” and Andy Zuliani’s “Last Tide” with readings followed by a Q&A. The official bookseller for the event is Massy Books.

This event will be held on Zoom and will be recorded.
The Zoom link will be emailed to subscribers in the email confirmation from Eventbrite.

Ana and Win find themselves stuck, lifting the weight of their pasts, while frustrated by their present jobs: photographing vacant lots and decayed industrial sites, cataloguing the decline of capitalist excess to digitally scrub away humanity, making way for more gentrification.

When the pair is sent by their employers to a rustic island in the Pacific Northwest – home to hippies, runaways, and survivalist preppers – they meet Lena, an oceanographer and climate scientist, who has moved to the island in search of “the big one,” the cataclysmic earthquake and tsunami that she knows is the island and the West Coast’s due; and Kitt, an athleisure clothing mogul, who is overseeing the construction of a vacation home that will serve as his apocalypse-shelter.

These four people’s lives intertwine as a police investigation throws life on the island into disarray, as activists and agents provocateurs take action, as dormant fault lines begin to tremble.

Zuliani’s Last Tide is a vital debut novel is an edgy glimpse at a world just beyond tomorrow, and a sharp reminder of what society deems valuable.

The Author: Andy Zuliani is a writer and multimedia artist who lives in the unceded territories of the Musqueam, Squamish, and Tsleil-Waututh Nations. He was born in the suburbs of Vancouver, and educated at Simon Fraser University and New York University. In his written and audio-visual work, he is drawn to the cultural afterlives of the 1960s; to the possibilities of ambience, tone, and collective feeling; and to narratives of crisis, of healing, and of improvised communities of care.

About “The Cine Star Salon”:

Philippine-born Vancouverite Sophia is most grateful for two things: her modest hair salon and Adrian, her mild-mannered fiancé. She is eager to get married, move away from her highly educated but career-frustrated parents, who believe that their daughter can be so much more than a beautician.

Then Sophia’s estranged friend reaches out from Manila, desperate for help. After a dubious accident, her fiery Auntie Rosy is on the verge of losing the Cine Star Salon–the place where Sophia first felt the call to become a hairstylist and salon owner. Coming to her auntie’s aid is not so easy though. Sophia worries helping might reopen old wounds and threaten the bright future she has planned.

Ranada’s debut novel is a graphic and engaging depiction of the importance of women’s work and the loyalties that connect friends across oceans. The Cine Star Salon marks the entry of a vital new voice in Canadian literature.

The Author: Leah Ranada was born in the Philippines. She moved to Canada in 2006, shortly after graduating from University of Santo Tomas in Manila. She attended The Writer’s Studio at Simon Fraser University in 2013. Her short stories have appeared in On Spec, Room Magazine, Santa Ana River Review, Scarlet Leaf Review, and elsewhere. Leah has brought her administrative and editorial skills to legal, settlement services, and academic workplaces. She lives in New Westminster and blogs at leahranada.com. The Cine Star Salon is her debut novel.