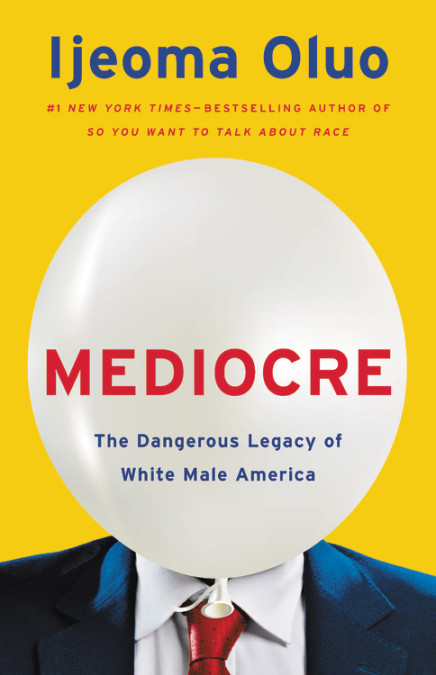 Join Ijeoma Oluo, the author of the New York Times bestseller So You Want to Talk About Race, in conversation with author Cicely Belle Blain.  hosted by Hachette Book Group and Massy Arts, this event celebrates the necessary new release Mediocre: The Dangerous Legacy of White Male America.

How to Attend:
Registration is mandatory for this event. Register through this link:
https://www.eventbrite.ca/e/ijeoma-oluo-in-conversation-with-cicely-belle-blain-tickets-139121605467

Massy Books is offering 20% Mediocre for the month of February as part of their Black History Month reading list. Check out the full list here: https://t.co/rIisIWAwSz

What happens to a country that tells generation after generation of white men that they deserve power? What happens when success is defined by status over women and people of color, instead of by actual accomplishments?

Through the last 150 years of American history — from the post-reconstruction South and the mythic stories of cowboys in the West, to the present-day controversy over NFL protests and the backlash against the rise of women in politics — Ijeoma Oluo exposes the devastating consequences of white male supremacy on women, people of color, and white men themselves. Mediocre investigates the real costs of this phenomenon in order to imagine a new white male identity, one free from racism and sexism.

As provocative as it is essential, this book will upend everything you thought you knew about American identity and offers a bold new vision of American greatness.

Ijeoma Oluo is a Seattle-based writer, speaker, and Internet Yeller. She’s the author of the New York Times Best-Seller So You Want to Talk about Race, published in January by Seal Press. Named one of the The Root’s 100 Most Influential African Americans in 2017, one of the Most Influential People in Seattle by Seattle Magazine, one of the 50 Most Influential Women in Seattle by Seattle Met, and winner of the of the 2018 Feminist Humanist Award by the American Humanist Society, Oluo’s work focuses primarily on issues of race and identity, feminism, social and mental health, social justice, the arts, and personal essay. Her writing has been featured in The Washington Post, NBC News, Elle Magazine, TIME, The Stranger, and the Guardian, among other outlets.

Cicely Belle Blain is a Black/mixed, queer non-binary femme from London, UK now living on the lands of the Musqueam, Squamish and Tsleil-Waututh people. Their ancestry is a mix of Gambian (Wolof), Jamaican, and English. Cicely Belle spent their formative years between London, the Netherlands, and a small Catholic village in France – each home presenting a pivotal opportunity for awakening and growth. Cicely Belle is descended from a long line of feminist educators and developed a passion for justice from a young age.

Cicely Belle is noted for founding Black Lives Matter Vancouver and subsequently being listed as one of Vancouver’s 50 most powerful people by Vancouver Magazine twice, BC Business’s 30 under 30 and one of Refinery29’s Powerhouses of 2020. Cicely Belle is an anti-racism consultant and also an instructor in Executive Leadership at Simon Fraser University, the Editorial Director of Ripple of Change Magazine and the author of Burning Sugar (Arsenal Pulp Press and VS Books, 2020). Purchase a copy of Burning Sugar from Massy Books here.