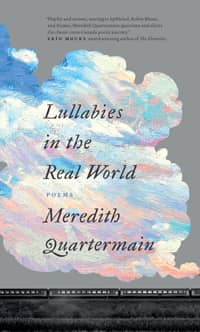 Lullabies in the Real World: Book Launch with Guests

Meredith Quartermain’s Lullabies in the Real World is a sequence of poems about a train journey from West Coast to East Coast that invokes a patchwork of regions, voices and histories. Her language zings with train rhythms as she unfolds a complex conversation with poets such as bpNichol and Robin Blaser.

Join Meredith Quartermain with guests Shazia Hafiz Ramji and Rahat Kurd for an evening of poetry, followed by a Q and A.

How to Attend
This event will be hosted online via Zoom. The event will be recorded, however audience members will not be heard throughout the event. Register for the event and the Zoom link will be emailed.

Lullabies in the Real World reflects and refracts Canada from diverse angles, and challenges colonizing literatures such as the Odyssey and various canonical British and US voices. As it moves from west to east, the book journeys back in time to interrogate historical events such as the Battle of the Plains of Abraham and the exclusion of Acadians. It ends by imagining a time before or outside colonization.

Rich, playful and confrontational, Lullabies in the Real World widens the poetic lens of poetry to investigate the place of a colonial nation in history, and the place of a poet vis-à-vis the voices of other poets.

Meredith Quartermain is a poet and novelist living in Vancouver, British Columbia. Her first book of poetry, Vancouver Walking, won a BC Book Award for poetry; Recipes from the Red Planet was a finalist for a BC Book Award for fiction; and Nightmarker was a finalist for a Vancouver Book Award. A novel called Rupert’s Land was released by NeWest Press in Fall 2013. She has since published a collection of stories entitled I, Bartleby, in 2015, and a novel, U Girl, in 2016. She is also cofounder of Nomados Literary Publishers, who have brought out more than 45 chapbooks of innovative Canadian and US writing since 2002. From 2014 to 2016, she was Poetry Mentor in the SFU Writer’s Studio Program, and she has enjoyed leading workshops at the Kootenay School of Writing, The Toronto New School of Writing and Naropa University. In Spring 2020, her latest collection of poems, Lullabies in the Real World, was released as a part of the Crow Said Poetry Series.