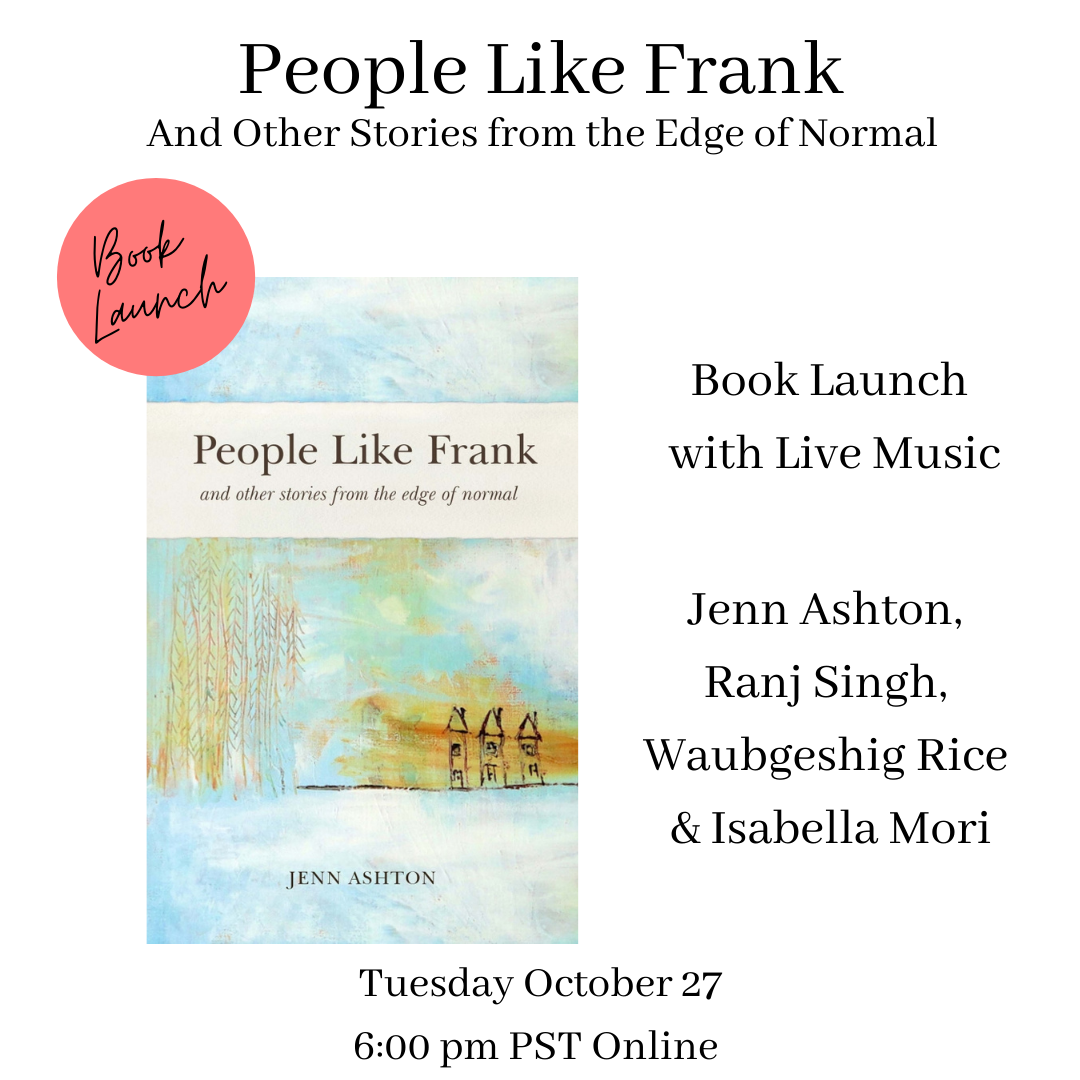 Author Jenn Ashton is joined by very special guests Ranj Singh, Waubgeshig Rice & Isabella Mori to celebrate the launch of “People Like Frank And Other Stories from the Edge of Normal”. Available for purchase through Massy Books. This musical evening includes performance, reading, and discussion, and is sure to be a lively event. 𝐓𝐨 𝐣𝐨𝐢𝐧 𝐮𝐬 𝐟𝐨𝐫 𝐭𝐡𝐞 𝐥𝐚𝐮𝐧𝐜𝐡 𝐜𝐨𝐩𝐲 𝐚𝐧𝐝 𝐩𝐚𝐬𝐭𝐞 𝐭𝐡𝐢𝐬 𝐥𝐢𝐧𝐤 𝐢𝐧𝐭𝐨 𝐲𝐨𝐮𝐫 𝐛𝐫𝐨𝐰𝐬𝐞𝐫:
https://youtu.be/fWJazAEEJlI
ABOUT THE BOOK:
On the edge of normal, challenges take many forms—the everyday can be an adventure and the ordinary a triumph.
A young woman in a group home investigates a mysterious piece of knitting. An obsessed bag boy does grim battle with a squirrel. A woman, an asparagus bag and a garbageman have a tumultuous short-term relationship. Otherwise unremarkable achievements become epic on the edge of normal.
Purchase a copy through Massy Books: https://bit.ly/34zMtGD

“In this superb collection of haunting and darkly humorous

stories, Jenn Ashton casts a compassionate eye over the banal

and deftly plucks out the extraordinary.”

ABOUT THE AUTHOR:
Jenn Ashton is an award-winning author and visual artist living in North Vancouver, B.C. She is the author of the prize-winning “Siamelaht” in British Columbia History in 2019 and of the forthcoming “People Like Frank, and Other Stories from the Edge of Normal” by Tidewater Press. She is a Director on the Board of the Federation of British Columbia Writers as well as The BC Indigenous Writers Collective She is currently working on numerous projects including a book about the history of her family in the lower mainland. Jenn has also just completed a year as a Teaching Assistant in the Simon Fraser University’s Writer’s Studio and is now studying at the Harvard Graduate School of Education.
ABOUT THE GUESTS:
RANJIT “Ranj” SINGH makes music with a distinct Indian-Western flair that draws on the singer-songwriter and self-taught guitarist’s love for rock music and heartfelt lyrics. He refers to his unique blend of music as “Indo-Canadian Folk”. In the mid 80’s, Ranj started his career performing with many folk-Punjabi and Hindi artists in the Vancouver area. In the 90’s he, along with his talented brothers, helped form the influential and critically acclaimed group Dal Dil Vog, where their unique style of bhangara/rock music led to tours throughout North America and India. After Dal Dil Vog disbanded, Ranj recorded two solo projects, Simple Man and Man Cold, and a third, Found A Way Home, with his band The Discriminators.
WAUBGESHIG RICE is an author and journalist from Wasauksing First Nation on Georgian Bay. He has written three fiction titles, and his short stories and essays have been published in numerous anthologies. His most recent novel, Moon of the Crusted Snow, was published in 2018 and became a national bestseller. He graduated from Ryerson University’s journalism program in 2002, and spent the bulk of his journalism career at CBC. He lives in Sudbury, Ontario with his wife and two sons.
ISABELLA MORE lives in Richmond and is the author of two books of and about poetry, including “A bagful of haiku – 87 imperfections.” Isabella writes poetry, short fiction, novels and nonfiction. Publications have been in places such as the 2019 anthology “The Group Of Seven Reimagined.” Isabella is the founder of “Muriel’s Journey Poetry Prize,” which celebrates loud, edgy, socially engaged poetry, and is a regular contributor to and occasional editor of “Family Connections”, a newsletter for families and supporters of people with mental health and substance use challenges. Isabella’s twitter handle is @moritherapy